Austria has sent armored vehicles to the Italian border to block migrants from entering the country.

Vienna’s government said it is bolstering border controls at the Brenner Pass, a key trade and transport route through the Alps that connects Italy and Austria. The government said it has 750 troops ready to be deployed to the border if a migrant emergency should develop. 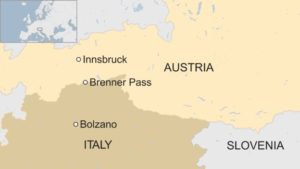 “We are ready to protect our Brenner border if necessary,” said Foreign Minister Sebastian Kurz.

Austria has become increasingly concerned over the huge number of asylum seekers who continue to cross the Mediterranean from Libya. More than 85,000 have been rescued and brought to Italy this year, the Telegraph reported on July 4.

With France and Switzerland closing their borders to migrants since last year, the tens of thousands in Italy have nowhere to go.

Austria has border checks with Hungary and Slovenia, but elsewhere it adheres to the EU open borders system.

The EU came up with a plan to relocate around 160,000 asylum seekers stuck in Italy and Greece but so far only 20,000 have been resettled, the Telegraph report said.

Doskozil’s spokesman said that, while there was no concrete timetable for the new controls, “we see how the situation in Italy is becoming more acute and we have to be prepared to avoid a situation comparable to summer 2015.”

In 2015, thousands of migrants streamed into Austria from Hungary in what Vienna called a “wake up call” for Europe to come to grips with its biggest refugee influx since World War II.

Analysts say Austria’s militarization of the border seemed to be, in part at least, driven by domestic political considerations with the far-Right Freedom Party set to do well in October elections unless the Vienna government can “seize the initiative on migration and border security.”

The Italian government, meanwhile, has warned it as the breaking point after years of taking in hundreds of thousands of migrants.

“We are asking for the work to be shared,” Italian Prime Minister Paolo Gentiloni said on July 3. “This is necessary if … we are to avoid the situation in Italy becoming unsustainable and stoking hostility in a society which until now has responded in an exemplary way, with cohesion.”