Family members of the woman whose likeness serves as the basis for the Aunt Jemima syrup brand are calling on Quaker Foods to resist the woke mob’s call to change the name. 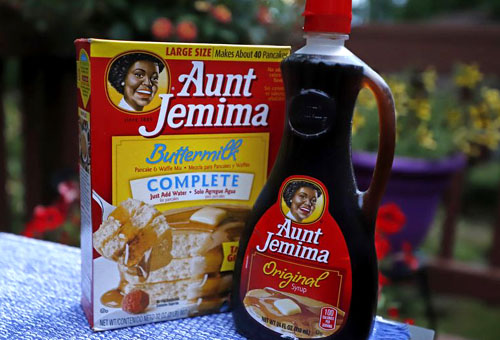 Texas resident Vera Harris told The Daily Mail that Richard, the woman on the Aunt Jemima bottle, was her second cousin and that she served as Quaker’s brand ambassador for more than 20 years, beginning in 1925, and that the “mammy” image led to the construction of a historic marker in her hometown of Fouke.

“A lot of people want it removed,” Harris told local KLTV. “We want the world to know that our cousin Lillian was one of the Aunt Jemimas and she made an honest living. We would ask that you reconsider just wiping all that away. There wasn’t a lot of jobs, especially for black women back in that time. She was discovered by Quaker Oats to be their brand person. She made an honest living out of it for a number of years.”

“She was considered a hero in Hawkins, and we are proud of that,” Harris said. “We do not want that history erased.”

Chumley noted: “If Aunt Jemima’s own family members aren’t offended by the image, maybe the rest of us shouldn’t be, either.”

The mob comes for Mrs. Butterworth

“We understand that our actions help play an important role in eliminating racial bias and as a result, we have begun a complete brand and packaging review on Mrs. Butterworth’s,” Conagra Brands Communications Manager Dan Skinner told Forbes.

The company added: “We stand in solidarity with our Black and Brown communities and we can see that our packaging may be interpreted in a way that is wholly inconsistent with our values. It’s heartbreaking and unacceptable that racism and racial injustices exist around the world. We will be part of the solution. Let’s work together to progress toward change.”

According to USA Today, while the race of Mrs. Butterworth, which has been on shelves for nearly 60 years, has not been confirmed, many have suspected her to be a black woman.

Uncle Ben’s Rice announced that it would be changing its “brand identity” to “end racial biases and injustices.”

“As a global brand, we know we have a responsibility to take a stand in helping to put an end to racial bias and injustices,” the Mars-owned brand said in a statement.

Uncle Ben has been a credit to his rice since 1946. It is the number one rice brand in the world. According to Mars, Uncle Ben was an African-American rice grower known for the quality of his rice.

“As we listen to the voices of consumers, especially in the Black community, and to the voices of our Associates worldwide, we recognize that now is the right time to evolve the Uncle Ben’s brand, including its visual brand identity, which we will do,” the statement continued.

The company added that it did not yet know “what the exact timing or changes will be.” Still, the company said it is “evaluating all possibilities.”

“Racism has no place in society. We stand in solidarity with the Black community, our Associates and our partners in the fight for social justice. We know to make the systemic change needed, it’s going to take a collective effort from all of us – individuals, communities and organizations of all sizes around the world,” the statement continued.

Eskimo Pie ice cream will undergo a name change after the company determined the name to be “derogatory.”

Dreyer’s Grand Ice Cream, owner of Eskimo Pie, told Reuters that the business has been under review, and they “recognize the term is derogatory.”

“We are committed to being a part of the solution on racial equality, and recognize the term is derogatory,” Elizabell Marquez, head of marketing at Dreyer’s Grand, said in a statement.

“This move is part of a larger review to ensure our company and brands reflect our people values,” Marquez added.

The treat was patented by Christian Kent Nelson of Ohio and his business partner Russell C. Stover in 1922, according to Smithsonian Magazine.

The “plantations” portion has come under increased scrutiny from the woke mob.

The order will change the name to just “Rhode Island” in official communications from the governor’s office — including future executive orders, citations and letterhead. It also calls on all state executive agencies to remove “plantations” from their websites.

The governor’s order does not change the state’s official name permanently — that will require voters to amend the Rhode Island Constitution, the order states.

The state Legislature has indicated it will move forward with the referendum after the Rhode Island Senate passed a measure last week calling for a statewide vote on the name change.

Previous attempts to change the state’s name have failed after the issue was put on the ballot. In 2010, almost 78 percent of voters opposed a constitutional amendment removing “Providence Plantations” from the state’s name.

The recent push for a name change may have started when an online petition began circulating following Floyd’s death.

“Some Rhode Islanders pride themselves on living in the ‘smallest state with the longest name.’ But, the history of how we got this name is often forgotten,” the petition reads. It currently has almost 7,500 signatures.