As Joe Biden vacationed, the Taliban conquered. And China was quickly moving in to fill the void left by an utterly incompetent U.S. foreign policy team.

Whether the 78-year-old Biden has the capacity to grasp what is happening before his eyes, one thing is clear, former President Donald Trump said — Biden must resign. 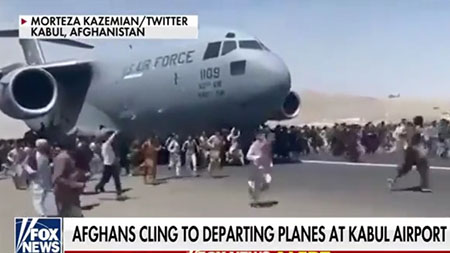 “What Joe Biden has done with Afghanistan is legendary. It will go down as one of the greatest defeats in American history!” Trump said in a statement released through his Save America PAC.

“It is time for Joe Biden to resign in disgrace for what he has allowed to happen in Afghanistan, along with the tremendous surge in Covid, the border catastrophe, the destruction of energy independence, and our crippled economy,” Trump said. “It shouldn’t be a big deal, because he wasn’t elected legitimately in the first place!”

U.S. evacuation flights in Kabul were suspended on Monday as the security situation collapsed.

Dramatic and historic video footage showed hundreds of Afghans breaching airport security with many jumping on departing U.S. military transports, with some falling to their deaths.

“For the past 20 years, our men and women have served heroically in Afghanistan. We must never forget their sacrifice.

“Sadly, this tragic end game in Afghanistan was entirely predictable and preventable. Ending America’s longest war is appropriate, and how it needed to be done was critical.

“The Trump administration developed a conditions-based withdrawal. According to this plan, no final withdrawal would have occurred until final successful peace negotiations took place between the Taliban and the Ghani government.

“President Trump personally engaged with Mullah Abdul Ghani Baradar, who led the Taliban delegation, and clearly laid out what would happen in the event of any Taliban intransigence. They understood and respected this approach because we had established credible deterrence in the preceding years, which is why no U.S. soldiers were killed in Afghanistan in the final 11 months we were in office.

“Similar engagement was made with Afghan President Ashraf Ghani. This laid the groundwork for Afghans to take the future of their country into their own hands.

“The difference between then and now is leadership. The Biden administration alone owns this failure, adding Afghanistan to Biden’s long history of, as President Obama’s Secretary of Defense Robert Gates said, being ‘wrong on nearly every major foreign policy and national security issue over the past four decades.’ ”

Meanwhile, China was working to build political legitimacy for the leaders of the so-called Islamic Emirate of Afghanistan.

As what less than a month ago Team Biden promised could not happen was happening, China was meeting with Taliban leaders. A session in the northeastern Chinese city of Tianjin between the communist regime of Chinese supreme leader Xi Jinping and Taliban co-founder and political office chief Mullah Abdul Ghani Baradar, Chinese Foreign Minister Wang Yi called the Taliban a pivotal military and political force in Afghanistan that is expected to play an important role in reconstructing the country, according to China’s Foreign Ministry.

“Beijing has had numerous interactions with the Taliban over the years, but the need for reassurances” grew as the Taliban was making a string of advances on the battlefield, the Wall Street Journal noted. “The Taliban see China as a source of international legitimacy, a potential economic supporter and a means of influence over Pakistan, a Chinese ally that has aided the group.”

Photographs from the July 28 session in Tianjin showed Chinese officials and the entire Taliban delegation.

“For all practical purposes it seems that the People’s Republic of China is in a hurry to grant legitimacy to Taliban. It was evident in the way that the PRC interacted with the Taliban group; akin to how it would welcome, and hold talks with genuine diplomatic missions from sovereign countries,” an India Today analysis noted.

China’s interest in Afghanistan “is possibly guided by very practical economic and business needs,” the analysis continued. “For one Afghanistan is believed to be sitting on Rare Earth and other mineral deposits valued at a possible $3 trillion. In 2014 the U.S. Geological survey estimated that there may be 60 million tons of copper, 2.2 billion tons of iron ore, 1.4 million tons of rare earth elements such as lanthanum, cerium and neodymium, and lodes of aluminium, gold, silver, zinc, mercury and lithium in Afghanistan. While a consortium of Chinese companies is already mining copper in the Logar province there is also oil that has been discovered and the bid was won by China National Petroleum Corporation to drill three oil fields for 25 years.”

As Trump recounted last month at the Turning Point USA Student Action Summit in Phoenix, he bombed the Taliban to the negotiating table.

After warning Taliban leader Hibatullah Akhundzada that he would “come back and hit you harder than any country has ever been hit” if he went back on the deal, Trump made good on his threat and launched punishing airstrikes the first time the Taliban violated the agreement.

“Since then, not a single U.S. soldier has died in combat in Afghanistan,” Timmerman noted.

Trump also maintained U.S. fighter jets and armed drones at Bagram airbase and used them to keep the Taliban in check.

“Biden ordered the midnight evacuation of the airbase on July 5 without even notifying the Afghan military,” Timmerman added. “Not surprisingly, within hours the Taliban had looted the base.”

The Taliban now has javelin missiles as well as the OS for Strykers and other military vehicles. “Everyone is wondering what the black market is going to have in Iran,” a US official told me.

“An F-15 flight simulator was also left in Bagram, the Taliban has that now.”