As cancer-stricken Khamenei fades, Iran’s IRGC may fill the void

By GIS/Defense & Foreign Affairs sources in Teheran and the region

Well-informed sources close to Iranian leadership circles have indicated that Iranian “Supreme Leader” Ayatollah Ali Hoseini-Khamenei, 77, was no longer responding to treatment for the cancer which spread from the prostate cancer which was detected as early as 2008; he may also have other forms of cancer, including one or more forms of leukemia. While observers have noted, in the past (indeed, since 2009), that the cancers were likely to prove fatal, there was evidence now that Iranian political and military figures viewed his situation now as grave. 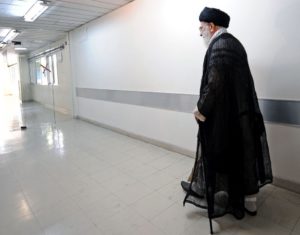 Former President Mahmud Ahmadinejad (2005-2013) felt sufficiently sure of the Supreme Leader’s condition that he defied his order not to challenge again for the Presidency in the forthcoming Presidential election, scheduled for May 19. In fact, however, it was probable that he could give way to his political colleague, former Vice-President Hamid Baghaee, to run on his platform, although there seems little likelihood that the Ahmadinejad camp could win.

When asked about the Supreme Leader’s injunction, Ahmadinejad noted: “This was only an advice, not an order.”

Incumbent President Hasan Fereidun Rouhani is favored to win re-election, and an Ahmadinejad candidacy would split the hardline vote, giving the advantage to President Rouhani. The 12-member Guardian Council, which scrutinizes the candidates, was to announce on April 26, 2017, which candidates it determined were qualified to run.

The situation, however, was brought into focus by the reports that the Supreme Leader — who had been in his post since 1989, after serving as President — was now terminally ill.

Thus, the leadership question in Iran is about more than the presidency and the other governing bodies, particularly since the death on Jan. 8, at age 84, of Akbar Hashemi Rafsanjani, Chairman of the powerful Expediency Discernment Council.

The death of Ayatollah Rafsanjani left a political gap which would be compounded if Aytaollah Khamenei was to leave office before, during, or just after the Presidential elections.

In fact, during the past Iranian year (which ended on March 20), three senior clerics who had supported President Rouhani (including Ayatollah Rafsanjani) had died, adding to the uncertainty within the overall leadership structure.

This pattern makes it seem likely that Iran would be internally-focused for the coming months, although Iranian-supported external endeavors in Syria, Iraq, Lebanon, and Yemen would clearly be sustained by mechanisms already in place. But the question remained as to how much attention the leadership of the Iranian Revolutionary Guard Corps (the Pasdaran), the significant combat force, would be paying to ensuring national stability in the event that a vacuum was perceived to emerge.

It seems probable that the Pasdaran itself could produce a strong leadership figure to fill such a vacuum in the way that Gen. Reza Khan did in 1921, removing the pro-British Government of Iran. [He then went on to serve, in 1923, as Prime Minister, until the Constituent Assembly appointed him as Shah, in 1925, to replace the last Qajar Shah, Ahmad Shah Qajar. That began the Pahlavi Dynasty.]