Public health officials in two Arizona counties are warning residents to keep their pets from running free after confirming that fleas in the two counties have tested positive for the plague, similar to the bacteria that cause the Black Death. 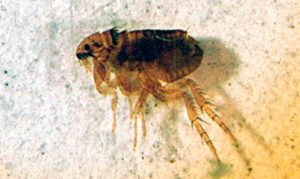 The health officials confirmed that fleas tested positive for the Yersinia pestis bacteria, which causes three forms of the plague, in Navajo County and Coconino County.

“Navajo County Health Department is urging the public to take precautions to reduce their risk of exposure to this serious disease, which can be present in fleas, rodents, rabbits, and predators that feed upon these animals,” the county’s health department posted on its Facebook page on Aug. 12.

“The disease can be transmitted to humans and other animals by the bite of an infected flea or by direct contact with an infected animal.”

Allowing pets to roam free may result in them picking up infected fleas, the health officials said, adding that pets which carry the fleas could then pass the disease to humans.

The plague “is curable with proper antibiotic therapy if diagnosed and treated early,” the health officials said.

Two months ago, health department officials in New Mexico confirmed that two residents of Santa Fe County had been hospitalized after being infected by the plague.

The Centers for Disease Control (CDC) said the plague bacteria circulating today are still remarkably similar to those that researchers have identified as the cause of the Black Death.