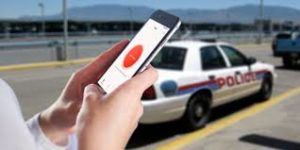 United We Dream created the Notifica (Notify) app “as a tool to protect immigrants living in the U.S. illegally by utilizing high tech and online social communications,” Judicial Watch noted in its Corruption Chronicles feature.

“With the click of a button, illegal aliens can alert family, friends and attorneys of encounters with federal authorities,” Judicial Watch said, citing a Laredo, Texas news article.

United We Dream describes itself as the country’s largest immigrant youth-led community, the Judicial Watch report said. The nonprofit, which has benefited from U.S. taxpayer dollars, has more than 400,000 members nationwide and claims to “embrace the common struggle of all people of color and stand up against racism, colonialism, colorism, and xenophobia.”

United We Dream started as a project of the National Immigration Law Center (NILC), according to records obtained by Judicial Watch. Between 2008 and 2010, NILC received $206,453 in U.S. government grants, the records show. The project funded was for “immigration-related employment discrimination public education.”

Both the NILC and its offshoot, United We Dream, “get big bucks from Soros’ Open Society Foundations (OSF),” Judicial Watch noted. “In fact, both nonprofits list OSF as a key financial backer.”