Environmentalist Michael Shellenberger planned to launch his new book with a column. But the subject matter was so hot that even Forbes spiked the piece which apologized for his role in the “climate scare.”

In response, contrarian websites, including Zero Hedge and Watt’s Up With That, reprinted the column in advance of Tuesday’s release of “Apocalypse Never: Why Environmental Alarmism Hurts Us All” (HarperCollins). 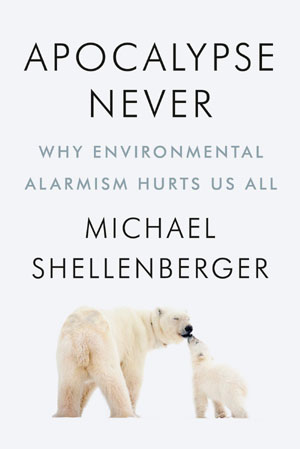 The new book, which is already climbing the Amazon bestseller charts, is a rare major release by a prestigious publisher “that refutes widely repeated environmental talking points; accuses climate activists of misleading the public, and contends that policy solutions such as green energy are making matters worse,” a report noted.

“Apocalypse Never: Why Environmental Alarmism Hurts Us All” (HarperCollins), “threatens to hit the climate movement harder than a wind turbine colliding with a bald eagle,” Valerie Richardson wrote for The Washington Times on July 1.

In the case of energy, Shellenberger said so-called natural solutions are worse for the environment. Solar and wind energy require vast amounts of land and play havoc with bird and wildlife species. Biomass essentially means burning wood and other plants, which chews up forests and produces carbon emissions.

Shellenberger said in a June 15 tweet: “Climate change is happening. It’s just not the end of the world. It’s not even our most serious environmental problem. I may seem like a strange person to say this. I’ve been a climate activist for 20 years & an environmentalist for 30”.

A Time magazine “Hero of the Environment,” Shellenberger has testified before Congress and was enlisted as an expert reviewer for the UN International Panel on Climate Change.

“Until last year, I mostly avoided speaking out against the climate scare,” Shellenberger said in a recent column. “Partly that’s because I was embarrassed. After all, I am as guilty of alarmism as any other environmentalist. For years, I referred to climate change as an ‘existential’ threat to human civilization, and called it a ‘crisis.’ ”

But mainly, he said, “I was scared,” worried about losing his friends and funding. Shellenberger said what helped change his mind was the impact of rising climate alarmism on children and teens.

“Definitely a big part of this is that my concern that the mental health of adolescents is being harmed by this apocalyptic alarmism, but it’s also hurting other things,” said Shellenberger, who has two children and lives in Berkeley, California.

The climate movement is “obviously anti-nuclear, even though nuclear is the only way to reduce emissions significantly,” he said. “And it’s being used to deprive poor countries of fossil fuels and frankly hydroelectricity and nuclear, because it comes from this Malthusian agenda that says there’s too many people in the world and everyone has to massively become much poorer.”

According to the book, climate activists have the cash advantage over climate skeptics: The two biggest green groups, the National Resources Defense Council and Environmental Defense Fund, have a combined annual budget of $384 million, dwarfing that of the two largest skeptic groups — the Competitive Enterprise Institute and the Heartland Institute, which combine for about $13 million.

“Climate activists massively outspend climate skeptics,” Shellenberger said. He traces the climate-change uproar to the zero-population movement, which was itself an outgrowth of theories promoted by Thomas Malthus, the 18th century economist who warned that population growth would lead to starvation.

“It’s the same people, the same movement,” said Shellenberger. “Climate emerges at exactly the moment when it was clear that overpopulation wasn’t going to be the big concern everybody thought it was. When climate goes away as an apocalyptic concern, something else will emerge. No doubt about it.”

He said the “demands are the same: Don’t let poor countries have fossil fuels, for heaven’s sake. Don’t let them industrialize. How terrible. Don’t let them move to cities, keep them in the villages, let’s give them a solar panel and a battery, that ought to be good enough. It’s pretty dark stuff.”

Richardson noted that, “like Patrick Moore, the former Greenpeace leader who was vilified after turning against the movement, Shellenberger will undoubtedly make some enemies — he anticipates an ‘intensely negative reaction’ to the book — but he believes the time is right for a fresh take on the climate.”

Shellenberger said in his column: “Nations are reorienting toward the national interest and away from Malthusianism and neoliberalism, which is good for nuclear and bad for renewables. The evidence is overwhelming that our high-energy civilization is better for people and nature than the low-energy civilization that climate alarmists would return us to.”