Antifa quickly took to social media to celebrate after a deputy sheriff in East Vancouver, Washington was killed in the line of duty on July 23. 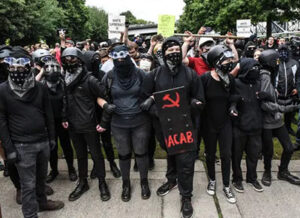 Screen grabs that were captured soon after the celebratory posts began popping up showed blatant mockery of the deputy.”Who has the officer down meme?” one wrote.

Another wrote: “I’m sorry for the loss of the potential he had to stop being a pig of his own volition, and for his loved ones who are hurting. Also, ACAB [All Cops Are Bastards].”

A @ClarkCoSheriff deputy was shot in the head near Portland (in Vancouver, Wash.) overnight and killed. The suspect remains at large. Antifa accounts have been celebrating on Twitter in response. pic.twitter.com/SdlByZGAfN

Joel Oltmann, who has written extensively on Antifa terrorists, noted in a Telegram post: “Antifa IS an organization and Antifa are terrorists. They celebrate the death of a sheriff’s deputy, executed by one of their evil trash followers. … Prayers for the family of this man. This is a fallen American, not just police officer.”

On Friday evening, reports say, three gunshots rang out in The Pointe Apartments, on NE 109th Av. and I-205 in Vancouver, Washington, close to the Oregon border. The deputy, who remains anonymous at the time of this report, was severely injured, and, later that same night, died of his wounds.

According to the Columbian, three suspects are now in custody.