Leftists, who only last week launched a campaign to boycott Equinox and SoulCycle gyms owned by a Trump supporter, are now calling on folks to stop eating at a restaurant chain that serves up the “#1 Best Breakfast in Michigan”.

Why? The owner of Anna’s House, the restaurant adorned with the “best breakfast” signage, has donated to President Donald Trump’s campaign. 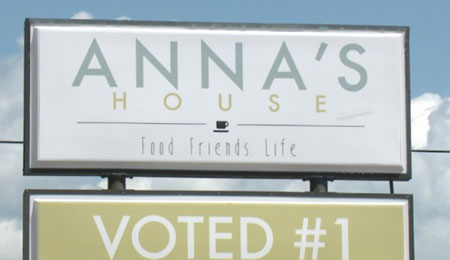 Even if it’s not the best breakfast, they must get it elsewhere, the leftist brigade clamors.

Federal Elections Commission (FEC) records show Anna’s House Corporate, LLC has made two $2,800 donations to Donald J. Trump for President, Inc. One contribution is for the primary election, the other is for the general election. Anna’s House is also listed as giving $15,000 to Trump Victory, a joint fundraising committee.

According to local reports, a screenshot of a page showing the donations showed up on Reddit and the Facebook page of Michigan resident Doug Chu. “anna’s house is canceled,” wrote Chu.

NTD.com reported that “The post received 119 reactions, 229 comments, and 22 shares, but led to an even bigger response throughout Facebook. Anna’s House has locations throughout Michigan, and Facebook pages for each location, now flooded with comments of hate from the anti-Trump crowd.”

“I am proud to live in a country where we are free to have different opinions and to support a candidate of our choice. At Anna’s House, we employ and serve people of all backgrounds and beliefs, without judgement. Our goal is to treat everyone like family – and in families, there are often differences of opinion. Embracing these differences and respecting each other despite them is what makes our country great. If you are looking for an open, supportive, and accepting place to enjoy a great meal and conversation, Anna’s House is here for you.”

“Treating people with different political viewpoints as enemies to be eliminated is toxic and counterproductive. Anna’s House is a popular locally-owned business that has found success serving delicious breakfasts that everyone can enjoy. It’s too bad that some would prefer division and strife over breaking bread, but that just means there’s more waffles for the rest of us.”

Meanwhile, five employees at a Burger King in Clovis, New Mexico were fired after they drew a picture of a pig on the wrapper of a burger that was served to a police officer.

Officer Timo Rosenthal posted a photo to Facebook with the caption “When you order food in uniform.”

Ronsenthal wrote: “Well, while on lunch break (and in uniform) I ordered food at Burger King and received this. The patties were burnt and the burger was of very poor quality. Guess that was the last time I ate at Burger King in Clovis, NM.”

A spokesperson for Burger King told Fox News: “What occurred is unacceptable and not in line with our brand values. When made aware of the incident, the restaurant owner immediately reached out to the officer involved to apologize…”

The spokesperson added: “The restaurant is offering free meals to uniformed officers and will provide a catered lunch to the police department as a gesture of goodwill.”