Analyst: Great Reset’s lab-grown meat is ‘one of the worst ideas in human history’

A key goal of the Great Reset pushed by leftists worldwide is “to control populations by creating dependence on private companies that control the food supply,” an analyst wrote.

Bill Gates and the World Economic Forum, led by its founder Klaus Schwab, have all but endorsed a plan aimed at transitioning humans to “cultured meat made from animal cells grown in a petri dish,” Dr. Joseph Mercola wrote for The Defender on June 23. 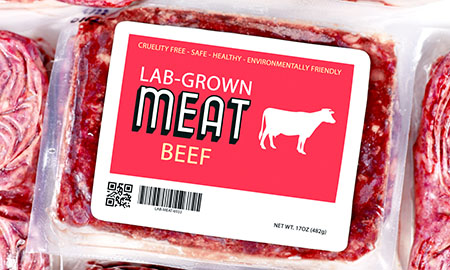 The goal of getting the world to ditch real meat for the lab-grown stuff has already gone public.

In his keynote presentation at this year’s Natural Products Expo West, Nick McCoy of Whipstitch Capital stated: “The only way we are going to meet demand, as a planet, is through cultured meat.”

Mercola wrote that McCoy’s proclamation is “an outright lie, but one that works well for those pushing The Great Reset agenda.”

The globalists’ key arguments for synthetic meats include:

• Sustainability — Raising livestock is unsustainable as it requires large amounts of land. Synthetic meats can be produced using a small land footprint, and it can be produced far faster, to keep up with growing food demands.

• Combating climate change — It’s environmentally friendlier than raising livestock, which are a source of methane gas.

•Animal welfare — It’s humane, as no animals are killed for human food.

As Mercola noted: “These arguments are all provably false, however, and nothing more than a flimsy veneer to cover the truth, which is that the shift to patented foods is all about creating population control through dependency.”

One of the key players in the push to get humans to accept and consume lab-grown meet is the Bill & Melinda Gates Foundation.

Gates said he thinks wealthy countries should be eating all fake meat and that “you can sort of change the [behavior of] people or use regulation to totally shift the demand.”

The EAT Forum, co-founded by the Wellcome Trust, has developed what they call “The Planetary Health Diet,” which entails cutting meat and dairy intake by up to 90%, and replacing it largely with foods made in laboratories, along with cereals and oil. Their largest initiative is called FReSH, which aims to transform the food system by working with biotech and fake meat companies to replace whole foods with lab-created alternatives.

“Once tech giants have control of meat, dairy, cereals and oils, they will be the ones profiting from and controlling the food supply, and the private companies that control the food supply will ultimately also control countries and entire populations,” Mercola wrote. “Biotech will eventually push farmers and ranchers out of the equation, thereby eliminating any hope of food security. So, the work being done in the name of sustainability and saving the planet is really all about shifting control over populations to private corporations.”

Mercola continued: “Those corporations, in turn, are funded and/or owned by the same globalist cabal that is trying to ‘reset’ everything else in society. And, just as all the rest of The Great Reset agenda, the planned changes to the food supply are to the detriment of the global population. It’ll cause lower levels of health, more chronic disease and, ultimately, lower life spans.”

The animal rights movement who may think lab-grown meat is the future, may want to think again when they discover that “cultured meat does not spare lives of animals,” Mercola wrote.

“Cultured meat, or cell-based meat, is produced from animal tissue cells that are then grown into larger slabs. One of its main selling points is that you can eat your beef without harming an animal. What the PR leaves out, however, is that a key ingredient to grow the cells is fetal bovine serum (FBS), which is made from the blood of cow fetuses.”

The contention that cultured meat is meat without slaughter “is false advertising at its finest,” Mercola added. “Eating cultured meat means you’re not merely eating an animal that was killed at the end of its life, you’re eating food made from an animal that was sacrificed before it was even born. That’s a pretty bizarre way to promote animal welfare, if you ask me. The reality is they need both cows and calf fetuses to make cultured beef.”

Mercola concluded: “In my view, replacing real animal foods with fake substitutes, regardless of how they’re made, is one of the worst ideas in human history. Simply put, there are no benefits — not for the environment, human nutrition or animal welfare — only hazards and false claims. So, if you value your health, you would do well to stay clear of animal food substitutes, be they beef, poultry, fish or dairy substitutes.”

READ + SHARE my latest on #TheDefender as I dive deep on #BillGates quietly becoming the largest owner of farmland in the U.S. and the irresistible pull #Gates has to exert monopoly control over global food supplies. https://t.co/F6hOyCfsAw

Analyst: Great Reset’s lab-grown meat is ‘one of the worst ideas in human history’ added by Editor Two on June 23, 2022
View all posts by Editor Two →