FBI agents stormed the home of Roger Stone in a pre-dawn raid on Jan. 25 and, unsurprisingly, CNN was on site to capture every moment of the former Trump adviser’s arrest.

Video from CNN, which was the only network to be on the scene for the raid at Stone’s home in Florida, showed an FBI agent banging on the door and shouting “FBI open the door! FBI, warrant!” 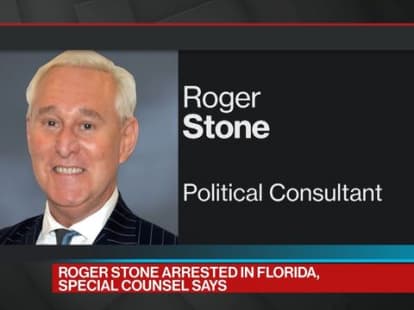 FBI agents, with large weapons drawn and wearing tactical vests, stormed Stone’s home. Stone was in his pajamas when he came to his doorway.

“Roger Jason Stone, Jr., 66, of Fort Lauderdale, Florida, was arrested in Fort Lauderdale today following an indictment by a federal grand jury on Jan. 24, 2019, in the District of Columbia,” said a statement released by special counsel Robert Mueller.

Mueller’s office charged Stone with witness tampering, obstruction and false statements, according to the indictment.

Investigators charge that Stone communicated with the Trump campaign about hacked DNC emails possessed by WikiLeaks.

President Donald Trump tweeted: “Greatest Witch Hunt in the History of our Country! NO COLLUSION! Border Coyotes, Drug Dealers and Human Traffickers are treated better. Who alerted CNN to be there?”

CNN’s Jeremy Herb explained it: “The rare, dramatic video from CNN Friday capturing the early morning FBI raid of longtime Donald Trump confidante Roger Stone’s Florida home was the product of good instincts, some key clues, more than a year of observing comings at the DC federal courthouse and the special counsel’s office – and a little luck on the timing.”

Former Republican presidential candidate Herman Cain noted: “In a miraculous bit of totally-unplanned coincidence, CNN cameras just happened to be on the scene about an hour before the raid took place. So, who tipped them off?”

Others wondered why the FBI show was necessary at all.

“The big story here isn’t so much Stone, and his arrest on obstruction, giving false statements and witness tampering. The big story here is the Stormin’ Norman thuggishness of America’s FBI,” columnist Cheryl K. Chumley wrote for The Washington Times.

“These are the types of arrests normally reserved for the lowest of the lowlifes, the most violent of the violent – the drug dealers, the mafia types and so forth.”

The FBI, Chumley noted, “is not the Gestapo. The FBI is not the KGB. The FBI is supposed to serve the interests of the American people – and that means protecting the Constitution’s rights of due process. That means treating arrested suspects like the innocents they are, until proven otherwise in courts of law. No dead-of-night, guns-a-blazin’, storm-trooping-type warrants for nonviolent, white-collar suspects needed.”