Eight wildlife conservationists who were conducting research into Iran’s endangered animals were arrested and charged with being spies and now face 10 or more years in prison, and possibly the death penalty, according to Amnesty International. 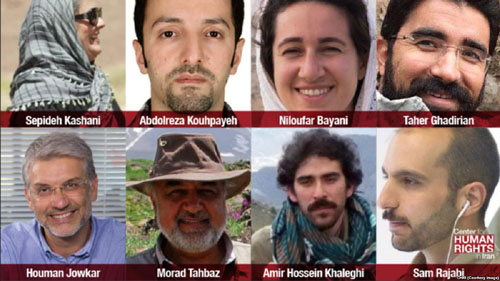 “Protecting endangered wildlife is not a crime. These conservationists are scientists who were carrying out legitimate research. It is absurd that they have been prosecuted without any evidence and are being treated as criminals,” said Philip Luther, Middle East and North Africa Research and Advocacy Director at Amnesty International.

“Iran’s authorities should release them immediately and unconditionally and drop the outrageous espionage-related charges against them.”

The scientists were arrested in January 2018 and are awaiting a verdict in their cases in the coming days, Amnesty International said. They were accused of espionage after using cameras to track endangered species, including the Asiatic cheetah and Persian leopard.

The eight conservationists are among nine scientists who were arrested by the Islamic Revolutionary Guards Corps (IRGC) on Jan. 24 and 25, 2018. One of them, Kavous Seyed-Emami, a Canadian-Iranian scientist and academic, died under suspicious circumstances in Evin prison two weeks after his arrest. Authorities claimed that he had committed suicide and refused to release his body unless his family agreed to an immediate burial without an independent autopsy. Amnesty International has previously called on the Iranian authorities to conduct an impartial investigation into his death.

In October 2018, the conservationists were formally charged. Four of them, Niloufar Bayani, Houman Jowkar, Morad Tahbaz and Taher Ghadirian, were charged with “corruption on earth” (efsad f’il arz) and could be sentenced to death.

The conservationists have been denied access to a lawyer of their choosing throughout their entire detention and trial, Amnesty International said, adding that “there is evidence that they were subjected to torture and other ill-treatment including through prolonged solitary confinement in order to extract forced ‘confessions,’ ”

Sources told Amnesty International that the court has used as the main evidence against the scientists “confessions” allegedly made under torture, which later were retracted.

Niloufar Bayani told the court that she only made a “confession” after she was “broken” through physical and psychological torture and that she later retracted her “confession.”

Bayani also said “interrogators threatened to beat her, inject her with hallucinogenic drugs, pull out her fingernails and arrest her parents; they also showed her a piece of paper saying it was her death sentence and pictures of the dead body of Kavous Seyed-Emami, implying that she would meet a similar fate,” Amnesty International said.

During one of the trial sessions, the judge told Bayani to leave the courtroom for being “too disruptive” after she repeatedly objected to the fact that her retracted forced “confessions” were being used against her and the other conservationists. Consequently, she was not allowed to appear in court for the final three trial sessions, Amnesty International said.

“The charges against these scientists are utterly baseless and stem solely from their peaceful conservation activities. If they are convicted it would be an outrageous mockery of justice and a devastating blow for Iran’s scientific community,” said Luther.