Before Joe Biden rolled out his team’s new gun-control measures on Thursday, Arizona Republican Gov. Doug Ducey signed legislation that would prohibit police and sheriffs in the state from enforcing any new federal gun laws that may violate the Second Amendment. 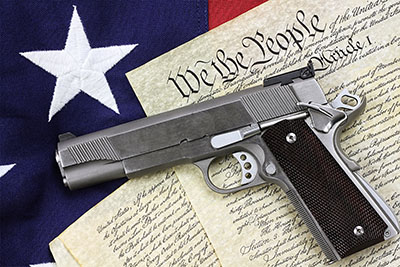 “The state of Arizona and its political subdivisions are prohibited from utilizing any financial resources or state personnel to administer, cooperate with or enforce any law, act, order, rule, treaty or regulation of the federal government that is inconsistent with any law of this state regarding the regulation of firearms,” states the text of the legislation, which Ducey signed into law on Tuesday.

Among the six initiatives Biden on Thursday said he is taking in executive actions, the Department of Justice was given 60 days to regulate AR-15-style pistols.

AR pistols could soon be subject to a $200 tax and require approval by the Bureau of Alcohol, Tobacco, Firearms and Explosives, a process that already takes nearly a year.

The White House said: “The Justice Department, within 60 days, will issue a proposed rule to make clear when a device marketed as a stabilizing brace effectively turns a pistol into a short-barreled rifle subject to the requirements of the National Firearms Act. The alleged shooter in the Boulder tragedy last month appears to have used a pistol with an arm brace, which can make a firearm more stable and accurate while still being concealable.”

Georgia Republican Rep. Marjorie Taylor Greene told the Washington Examiner on Thursday: “There is no cause or justification for the Biden administration to violate Americans’ Second Amendment rights and punish legal gun owners. Colorado already had strict gun control laws such as red flag laws, and those overbearing laws did nothing to stop this terrorist attack. After two recent murderous attacks by Muslims, Ahmad Al Aliwi Alissa, and Noah Green, a black nationalist and member of the Nation of Islam, the Justice Department should be investigating radical Islamic terrorist threats inside the U.S. and not making rulings about pistol stabilizers. Bumbling Joe Biden again has forgotten some very important facts. Shall not be infringed.”

Biden also said he will task the DOJ with issuing proposed rules to stop the proliferation of so-called “ghost guns” within 30 days. Ghost guns refer to kits that allow the recipient to assemble the firearm using provided parts.

Sixty days will also be provided for the DOJ to develop model “red flag” legislation that would allow friends and family members to identify an individual as a potential danger, thereby temporarily preventing the person from accessing a firearm.

Biden also called on the DOJ to issue a firearms trafficking report.

A Team Biden official said that, while Biden will call on Congress to act, he will not wait.

“Gun violence takes lives and leaves a lasting legacy of trauma in communities every single day in this country, even when it is not on the nightly news,” the White House said in a statement.

“It is more important now than ever that we protect our state rights,” Arkansas state Sen. Trent Garner, a Republican, said of the passage of the bill.

“Once [Democrats in the U.S. Senate] get rid of the filibuster, guess what happens next? It is called packing the courts,” he claimed, referring to statements by Democratic lawmakers who want to abandon the 60-vote legislative threshold in order to pass their agenda items.