‘America’s anchorman’: The Rush Limbaugh show at 30 is stronger than ever

Mike Moyers, station manager of AM 30 WTAD, which has been a Rush Limbaugh Show affiliate since 2000, says the anniversary “marks 3 decades of a guy, with no college education, no sheepskin, and a history of failure, continuing to make the complex understandable all with half of his brain tied behind his back.” 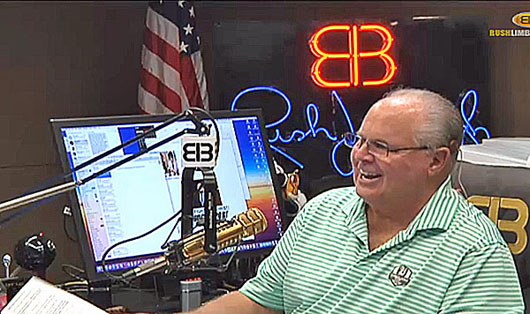 The Rush Limbaugh Show is currently carried on over 600 radio stations with a listener base of some 30 million people.

“Many in the radio business give Rush the credit for bringing AM radio back from the brink of extinction, which is where it was in the late 80s,” Moyers said. “Today syndicated daytime shows comprise the majority of the programming of AM and some FM stations across the land.  Sean Hannity, Mark Levin, Laura Ingraham, Glenn Beck are among those who have followed the Rush Limbaugh template.”

“He must be doing something right.”

“The first time I heard Rush was on a cassette given me by the station manager of WGEM in 1988,” Moyers said.

“He tossed it on my desk and said, ‘give this a listen. We have the rights to pick this program up if we want to.’ WGEM was, and still is, an ABC News affiliate and Rush was in New York trying to get the program off of the ground. So, I listened to the cassette. And while I could hear great passion in the delivery and the message I didn’t understand a thing the guy was talking about. So, we passed.”

Moyers continued: “Fast forward 30 years. One of the stations I manage, AM 930 WTAD, has been a proud Rush Limbaugh affiliate since November 27, 2000.  During that time I’ve experienced just about everything one can imagine in the radio world. I’ve seen major sponsors demand that their commercials NOT air inside or adjacent to Rush’s program. I’ve had conversations with media buyers of other clients who frankly told me they were instructed NOT to buy stations carrying Rush – even though the ratings numbers of the Rush stations dwarfed those of the other stations in that given market. I’ve had friends and acquaintances scold me for choosing to carry Rush on WTAD.

“I’ve been through all that but we’re still here. I believe in the Rush Limbaugh message.”

Moyers, who calls Limbaugh “America’s Anchorman,” described the radio host as “a gentle, loveable fuzzball who loves what he’s doing. And Rush, now north of the age of 65, dealing with severe hearing loss, being only able to hear through the use of cochlear implants, overcoming an addiction to oxycodone and the fact that he’s a conservative, continues to hit it out of the park.”

Thirty years later Limbaugh says there is still a lot more left for him to “prove.”

“It’s just the exact opposite.”

Limbaugh said he works harder now than ever.

“I’m not asking for any violins or anything, don’t misunderstand. I’m just saying it’s the exact opposite of what I thought would be the case after this many years.

‘America’s anchorman’: The Rush Limbaugh show at 30 is stronger than ever, AM radio revival, WABC radio New York, WorldTribune.com