The Democrat Party’s view of mask mandates has evolved since the days when they branded red state governors who lifted the mandates as engaging in “neanderthal thinking” as the anger of average Americans registers.

When Texas and Mississippi lifted mask requirements last May, Joe Biden called it a “big mistake.” 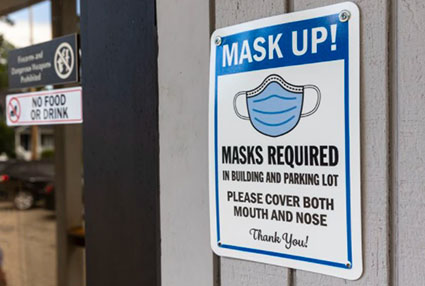 “The last thing we need is Neanderthal thinking that in the meantime everything’s fine, take off your mask, forget it,” Biden said. “It still matters.”

For Democrats, it is not so much following the science as watching the polls, analysts say.

The polling is pointing toward a monumental defeat for Democrats in the 2022 midterms.

“They’re watching the polls, they’re feeling the power of the people — the anger of the people — and they’re praying as best as their atheist, secular, non-believing selves can pray that America doesn’t get all Canada-ey in the coming weeks,” Cheryl K. Chumley wrote for The Washington Times on Feb. 9. “Right? Imagine: Truckers unite! After all, one did just snatch away a seat of Senate president power from the Democrats in New Jersey. Steve Sweeney, anyone? Imagine if he called out his buds for some good old-fashioned street protests this side of the border. Democrats are. And they’re biting nails in nervousness.”

As they see their 2022 prospects eroding by the day, Democrats are now “loosening regulations — regulations that shouldn’t have been in place anyway,” Chumley wrote. “They’re reeling in the mandates — mandates that shouldn’t have been in place anyhow. They’re restoring freedoms to the people and power to the parents — freedoms and powers that never should have been stripped in the first place.”

But they are still doing it in a piecemeal fashion.

Lamont said the face mask mandate for schools should be lifted on Feb. 28.

Murphy said the mandate should end in mid-March.

Carney said the face masking mandate should wrap this week — except for students in kindergarten through grade 12. They can’t remove masks until at least March 31.

Newsom said the indoor mask mandate should end Feb. 15 for the vaccinated — but not for school children. He left locals to decide whether or not school kids could go without face coverings. Los Angeles County has already said schools will be required to mask up for the foreseeable future.

Hochul lifted the mask mandate on businesses but kept it in place for schools.

“Where’s the science on this? Either face masks work, or they don’t. And if they don’t — which, as any follower of Stacey Abrams can tell you, they don’t — then why the differences in (insert air quotes here) mandates? Once again, Democrats are showing their powers for political exploitation,” Chumley wrote.

Chumley concluded: “Don’t think for a minute the Democrats have seen the folly of the face mask. They’re simply playing politics — walking a political tightrope — biding their time.

“If the polls shift back to Democrats’ favor, if midterm election dust settles and they realize they have an upper hand, these same governors will find a way to clamp down freedoms and bring back the mass face masking once again.

“There is no other reason to take face masks off one segment of society but not another except for political.”