That the Democrats have become the party of coastal elites is now backed up by hard data from the Nov. 8 election.

President-elect Donald Trump won 3,084 of the 3,141 counties in the United States. 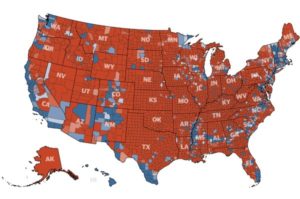 Hillary Clinton won just 52 coastal counties and five “county equivalent” cities stretching from San Diego to Seattle on the West Coast and Northern Virginia to Boston on the East Coast, including two major cities – Washington, D.C and Baltimore, Maryland – included in the five “county equivalent” cities, and three major cities – Philadelphia, New York, and Boston – which are included in the 52 counties.

“It is worth noting that virtually all members of the mainstream media reside within this narrow band of elite coastal counties,” Breitbart News said.

In the 3,084 counties Trump won, he held a 51 to 44 percent advantage, giving him a 306 to 232 Electoral College landslide. (On Nov. 28, the director of elections in the office of Michigan’s Secretary of State said that Trump had won the state’s 16 electoral college votes by a margin of 13,107 votes.)

So, those five counties alone more than accounted for Clinton winning the popular vote of the entire country. The five NYC counties comprise 319 square miles. The United States is comprised of 3,797,000 square miles.

Here is the full list of the 52 elite coastal counties carried by Clinton: