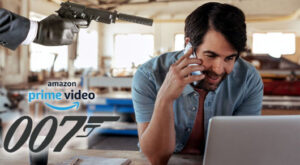 Amazon has purchased MGM Studios and the famous Bond franchise for $8.45 billion, according to reports. Current Amazon CEO Jeff Bezos expressed his excitement over the purchase.

“We are looking forward to bringing the story of British superspy James Bond into new and exciting directions!” said Bezos. “I can’t give away too much, but I can say that the next Bond film will be a story about how a powerful organization taking over the world is actually a good thing!”

Sources say the next movie will feature an evil supervillain named Bob Smith who hatches a dastardly plot to save American small businesses. Bond will have to mow down waves of evil small business owners and their minions to unravel the mystery and confront the ultimate evil.

The franchise will also do away with “Q,” from whom Bond usually gets all his cool gadgets. Instead, he will order his spy tools on Amazon Prime to be delivered by drone …