Outrageous news dropped out of New Mexico this week so we thought we’d do some extra digging around.

Hundreds of undocumented immigrants and families with mixed residency status across New Mexico will receive $6,000 over a 12-month period as part of a pilot program studying the effects of cash assistance.

Proponents of the pilot — developed through a coalition of advocacy organizations — hope the monthly $500 cash infusions will fill income gaps for families left out of federal coronavirus pandemic relief programs, such as unemployment aid and stimulus checks. The initiative is largely funded by the national W.K. Kellogg Foundation and the California-based nonprofit UpTogether. 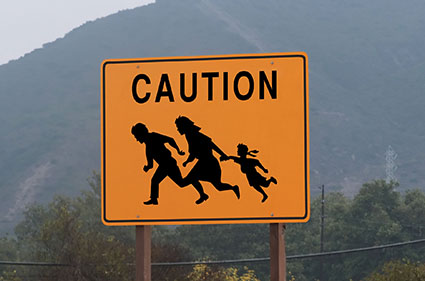 Illegal aliens are being showered with cash at the hands of the organizations involved in this campaign:

The coalition launching the program, the New Mexico Economic Relief Working Group, formed in April 2020 and includes immigrant-led nonprofit Somos Un Pueblo Unido and the child welfare group New Mexico Voices For Children. The network has helped distribute $24 million in cash assistance to low-income families and those with a mix of undocumented residents and legal residents or U.S. citizens.

The state government – meaning New Mexico taxpayers – is also being lobbied to help dole out even more money to illegals:

The New Mexico Economic Relief Working Group released a study last month on 1,000 Hispanic families in the state, which found the coronavirus pandemic disproportionately hurt the economic standing and employment status of Hispanic women, rural residents and Spanish speakers. Twenty-eight percent of those surveyed earned $20,000 or less in 2020, and 60 percent had less than $1,000 saved for emergencies.

The coalition is asking state lawmakers to allocate $15.6 million this legislative session in cash assistance to families who didn’t receive other pandemic aid.

An organizer quoted in The Las Cruces Sun News makes it clear that this mountain of cash is specifically going to boost the illegal alien “community” within a sovereign state of this nation:

“Low-wage immigrant workers, despite being essential to key industries in New Mexico’s economy, are often left behind in safety net and economic development policies,” said Marcela Díaz, executive director of Somos Un Pueblo Unido, in [a] news release. “The outcomes of this pilot will help us drive home the need for more inclusive cash assistance to benefit the health and long-term economic prospects of entire communities.”

Let’s take a closer look at the two key funders of this toxic initiative.

Breitbart’s John Binder points out that W.K. Kellogg “effectively controls” the Kellogg Corporation. Which means every time you buy their corn flakes or Pop-Tarts you are helping to subsidize illegal immigration.

The other organization involved, UpTogether, appears to be a financial heavyweight. From its website:

Last year alone, in partnership with philanthropists, government agencies, community organizations and individual donors, UpTogether distributed nearly $130 million to over 200,000 households across all 50 states, Puerto Rico and the District of Columbia. (Our COVID-19 Impact Report highlights the ways families used their investment. We were still known as Family Independence Initiative when the report was published.)

The UpTogether bio for CEO Jesus Gerena emphasizes that the organization is a social justice activist vehicle:

Jesús Gerena is CEO of UpTogether (Previously Family Independence Initiative), an antiracist change organization that trusts and invests in low-income families, allowing them to move themselves out of poverty. Under Jesús’ leadership, UpTogether has quadrupled its revenue, doubled in staff, and expanded its work to all 50 states through the adoption of its strength-based approach (SBA) and technology platform, UpTogether.

Corporate and institutional support for UpTogether is hard to pin down, but the George Soros-bankrolled Tides Foundation’s records show it donated a cool $1,141,404 in 2019 alone to the organization for “project support.” (see page 182 of pdf).

UpTogether’s COVID-19 Impact report shows that the coronavirus has proven to be a financial windfall for the group.

An introductory letter by CEO Gerena proudly proclaims that the Charles Koch organization Stand Together has been an essential partner in this COVID cash cow campaign that goes to aid illegals:

On March 26th, in response, and in partnership with Stand Together, we launched #GiveTogetherNow, our national effort to support those hit hardest economically. As I sit here at the end of August, our partnerships with philanthropy, local government agencies and individuals from all across the country have yielded $100 million to invest in nearly 200,000 households across all 50 states, the District of Columbia and Puerto Rico.

In September, WorldTribune detailed the full extent of Charles Koch’s drift to the cultural and political Left:

The Republican Party [once] served as a convenient vehicle to promote free-market globalist economic policies. But that was then and this is now.

The Koch empire saw the rise of Donald Trump and populist nationalism within the GOP and pulled its golden parachute….

Since then, the Koch colossus has noticeably lurched to the left. It has partnered with notorious progressive globalist billionaire George Soros to support Internet censorship and the witch hunt against “online hate,” which frequently means anyone who evinces a belief in nation-states.

Its funding of LIBRE as part of its Hispanic outreach has meant actively backing the illegal alien invasion of this country. It also funded the successful effort to pass Amendment 4 in Florida. The measure to restore voting rights for convicted felons was a crucial part of a partisan Democrat strategy to turn the crucial Sunshine State blue.

Citizenship is not a prerequisite to receive funds.

A separate website for Give Together Now makes clear that Koch’s Stand Together group is actively facilitating the secure existence of illegal aliens with the United States, even at a time when American citizens faced job loss and other serious hardships from the Coronavirus social hysteria:

In the midst of a global pandemic, Stand Together and Family Independence Initiative are partnering together to build a unique platform for crisis response.

Family Independence Initiative is the former name of UpTogether.

Koch personnel are listed in the “Team” section for UpTogether. Sitting on the Board of Directors:

Meet the kind of people putting hard, cold cash directly into the hands of illegal aliens rather than American citizens in need:

Prior to joining Stand Together Foundation, Evan served as president of Generation Opportunity and as a program manager at the Charles Koch Institute. In 2012, Evan became one of the first millennials to run for the U.S. Congress in his hometown of Pittsburgh, Pennsylvania. Earlier in his career, Evan served as a senior aide to U.S. Senators Rand Paul and Tom Coburn and as a researcher at the Heritage Foundation.

A radical organization partnered with a “free-market” entrepreneur and sitting on over $100 million in cash for its fight on behalf of “antiracist change” is now about to provide illegal aliens with regular subsidies to enable the further growth of this scourge. In any remotely sane country, a plethora of criminal charges would be in the offering for individuals and institutions alike.

In 2022 America, however, Charles Koch and the activists at UpTogether are more likely to be draped with medallions at the Kennedy Center by a somewhat befuddled but smiling Joe Biden.