Morris Dees, who co-founded the SPLC in 1971, was fired. President Richard Cohen and legal director Rhonda Brownstein, both of whom had been at the center since 1986, resigned. 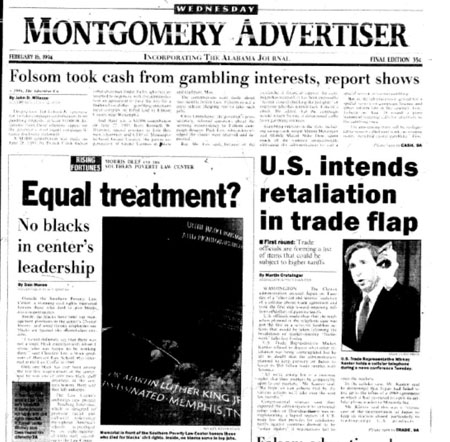 Sen. Tom Cotton, Arkansas Republican, said he has sent a letter to the Internal Revenue Service requesting an investigation into the tax-exempt status of the Southern Poverty Law Center (SPLC), which he blasted as a “racist and sexist slush fund devoted to defamation” against conservative groups and individuals.

In a March 21 New Yorker article, former SPLC staffer Bob Moser described the center as “in many respects, a highly profitable scam” that pulled in tens of millions of dollars annually but did little in the way of actual poverty law.

Problems at the SPLC have been documented as far back as 1994, when the local newspaper of the Montgomery, Alabama-based center published an eight-part series titled “Rising Fortunes: Morris Dees and the Southern Poverty Law Center”.

Jim Tharpe, a retired journalist who was managing editor of the Montgomery Advertiser when the series was published, wrote in an April 7 op-ed for The Washington Post that, after three years of research, the Advertiser “found a litany of problems and questionable practices at the SPLC, including a deeply troubled history with its relatively few black employees, some of whom reported hearing the use of racial slurs by the organization’s staff and others who ‘likened the center to a plantation’; misleading donors with aggressive direct-mail tactics; exaggerating its accomplishments; spending most of its money not on programs but on raising more money; and paying its top staffers (including Dees and Cohen) lavish salaries.”

The Advertiser’s report was a 1995 finalist for the Pulitzer Prize for explanatory journalism. Dees and Cohen denied the report’s findings and, Tharpe noted, “the SPLC mounted an aggressive campaign against the series when it was nominated for a Pulitzer Prize.”

Tharpe noted that “based on the details of Dees’ ouster” last month, “the problems we identified 25 years ago do not appear to have been resolved.”

“The question isn’t what went wrong at the SPLC; it is why it took so long for the rest of the country to learn what local reporters already knew,” Tharpe wrote. “It will probably take a federal investigation to fully unravel this Deep South mystery and provide a credible, long-term fix.”

Tharpe noted that, when he was managing editor, the Montgomery Advertiser was located one block from the SPLC in downtown Montgomery.

“We were, at the time, anything but adversaries with the center,” Tharpe wrote. “Like other media outlets, we generally parroted SPLC news releases. We also became friends with SPLC staffers, occasionally attending the center’s parties. Some of my reporters dated staffers at the center.”

Tharpe said he proposed an investigation into the SPLC after hearing of “ongoing complaints from former SPLC staffers, who came and went with regularity but always seemed to tell the same story. Only the names and faces changed. The SPLC, they said, was not what it appeared to be. Many urged the newspaper to take a look.”

After Advertiser reporters began making serious inquiries about the SPLC’s finances and the treatment of its black employees, the center’s leaders “threatened legal action on several occasions and at one point openly attacked the newspaper’s investigation in a mass mailing to Montgomery lawyers and judges. Then they slammed the door,” Tharpe wrote.

“Accommodating your charade of objectivity simply takes too much of our time,” center co-founder Joseph Levin wrote the Advertiser in 1993. “Our patience in this matter is exhausted, and we will not respond to further inquiries of any sort.”

Tharpe said that any investigation of the SPLC should “take a close look” at its finances.

“It should look at what the center has told donors in its mail solicitations over the years. And it should take a close look at how that donor money has been spent. Investigators should also look at how SPLC staffers have been treated over the years. Where was the center’s board when this mistreatment was going on? And why did no one step up sooner?” Tharpe wrote.

Writing for National Review, columnist David French noted: “I hope the SPLC’s reckoning will result in a sober reassessment of its legacy and a reconsideration of its targets. I hope that the SPLC’s moral collapse means the end of its public credibility. But, sadly, I’m not holding my breath. Too many activists and members of the media share the SPLC’s hatreds and biases.”