Alec Baldwin seems to cherish the freedom he has under the U.S. Constitution to trash President Donald Trump. 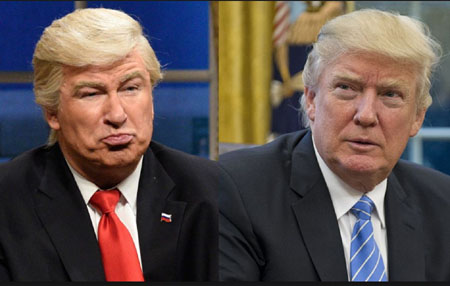 But the actor, who also has been known to punch people over parking spaces, is outraged and terrified when Trump uses his own rights under the First Amendment to lambaste Baldwin.

After Baldwin’s recent send-up of Trump, the president tweeted: “Nothing funny about tired ‘Saturday Night Live’ on Fake News NBC! Question is, how do the Networks get away with these total Republican hit jobs without retribution? Likewise for many other shows? Very unfair and should be looked into. This is the real Collusion!”

Trump added in a second tweet: “THE RIGGED AND CORRUPT MEDIA IS THE ENEMY OF THE PEOPLE!”

Baldwin tweeted: “I wonder if a sitting President exhorting his followers that my role in a TV comedy qualifies me as an enemy of the people constitutes a threat to my safety and that of my family?”

Baldwin was backed up by “a whole bunch of pundits and media personalities and left-leaning politicians,” who declared “oh-so-mightily how they have First Amendment rights and the president of the United States has no right to take away their First Amendment rights,” columnist Cheryl K. Chumley wrote for The Washington Times on Feb. 18.

The Left “does like to jump aboard a political moment and squeeze hard,” Chumley wrote.

Rep. Ted Lieu, California Democrat, tweeted: “One thing that makes America great is that the people can laugh at you without retribution.”

Peter Baker, the chief White House correspondent for The New York Times, tweeted: “It’s become commonplace enough in the past two years that it no longer gets much notice. But it’s worth remembering that no other president in decades publicly threatened ‘retribution’ against a television network because it satirized him.”

Does Baker recall this July 2017 headline in Newsweek? “When Obama Went to War on Fox News”.

“The larger point of this Trump v. ‘SNL’ spat is this: The Left regularly uses its free speech rights to call for ‘resistance’ and opposition and rebellion against this administration, going so far as to urge for organized protests against conservatives at their homes, while they eat, while they shop. The Left calls that free speech,” Chumley noted.

“But when Trump fires back at the Left on Twitter? That’s called threatening. That’s characterized as an attack on the First Amendment. That’s described as unsafe and intimidating and a plea for violence.”

Chumley added: “It’s interesting how the intolerants of the Left, who regularly trample and trounce the free speech rights of conservatives, can so speedily find their copy of the First Amendment when it comes to divisive, cutting, biting potshots of this president. But in so doing, they reveal their utter ignorance of the whole concept of freedom of speech: It runs both ways.”