Adam Schiff: Trump should never get another intelligence briefing

Democrat Rep. Adam Schiff said on Sunday that President Donald Trump should no longer receive daily intelligence briefings and should be prohibited from receiving such briefings after Jan. 20. 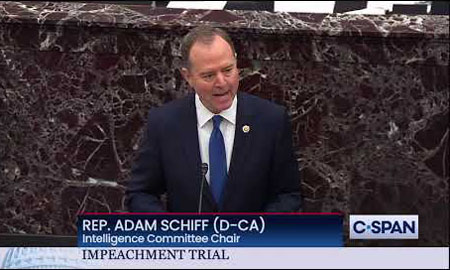 “There’s no circumstance in which this president should get another intelligence briefing, not now, not in the future. I don’t think he can be trusted with it now, and in the future he certainly can’t be trusted,” Schiff said of Trump.

If you reverse the subjects, that quote would actually be believable.

Let’s give it a try:

“There’s no circumstance in which this congressman should get another intelligence briefing, not now, not in the future. I don’t think he can be trusted with it now, and in the future he certainly can’t be trusted,” Trump said of Schiff.

Schiff is enshrined as one of the most prominent liars in the Russia hoax.

Writing for the Chicago Tribune in December 2019, John Kass noted that Obama-appointed Department of Justice Inspector General Michael Horowitz’s report on the Russia investigation revealed that “Schiff is a dissembler, a prevaricator, a distortionist, a spreader of falsehoods. In Chicago we use the short word: liar.”

Kass noted that it was Schiff “who insisted all along that FBI and Department of Justice officials did not abuse the FISA (Foreign Intelligence Surveillance Act) courts or hide information from judges. But according to Horowitz, that’s what the FBI did.”

Schiff had insisted in a 2018 memo that the “DOJ met the rigor, transparency and evidentiary basis needed to meet FISA’s probable cause requirement.” Kass said that infamous memo “should be carved in marble.”

The FBI “didn’t meet those rigorous standards. It didn’t offer transparency. Officials hid evidence from the court, or fabricated evidence to get what it wanted,” Kass noted.

Schiff also relentlessly cheered for the garbage dossier authored by Christopher Steele. A serial fabricator pushing a serial fabrication. Or, as Schiff might put it — work.

Then there was the time when Schiff fell hook, line and sinker for a prank call from a pair of Russian comedians nicknamed “Vovan” and “Lexus.”

“There were pictures of naked Trump,” one of the pranksters told Schiff, explaining that they were obtained by Putin’s goddaughter.

The gullible Schiff asks: “And the materials you can provide to the committee and to the FBI, would they corroborate this allegation? … So you have recordings… where they’re discussing the compromising material?”

“Obviously we would welcome the chance to get copies of those recordings,” Schiff says. “So we will try to work with the FBI to try to figure out how we can take copies of those… I’ll be in touch with the FBI about this, and we’ll make arrangements with your staff. I think it would be best to provide these materials to both our committee and the FBI. We’ll make arrangements between my staff and yours on how to facilitate that.”

So, to sum up, an easily manipulated and terribly compromised congressman who shouldn’t be allowed anywhere near U.S. intelligence information not only continues to chair the House Intelligence Committee but believes he is the one to decide who should and should not be allowed to receive intelligence briefings.

You can’t make this stuff up.