[Editor’s Note: We have added ‘Breaking‘ as a new feature because . . . Drudge has gone away.] [Note: Facebook’s algorithms are suppressing sharing of WorldTribune articles based on this article, due to unspecified objections by “independent fact checkers”. Specific comments from credible human sources about the following content should be directed to the editors’ attention.] 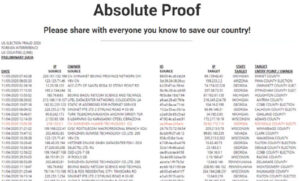 Millions nationwide are watching Mike Lindell’s documentary, ‘Absolute Proof,’ which presents evidence it claims merits investigation without the permission of the corporate media and Big Tech. The documentary is on Rumble, not You Tube.

The folksy founder of MyPillow starts by interviewing numerous experts and officials on evidence of fraud in battleground states and concludes with data presented by Mary Fanning.

Cybersecurity experts began documenting intrusions in 2195 U.S. counties beginning on Nov. 1, 2020 in real time and recorded each hacker’s location and IP address as well as the target counties as well as the impact on the votes cast the U.S. president over the next several days. 66 percent of the intrusions came from China, according to the data. “Proof positive,” she said.