Waukesha Judge Michael Bohren ruled on Thursday that absentee ballot drop boxes can no longer be used in Wisconsin elections. 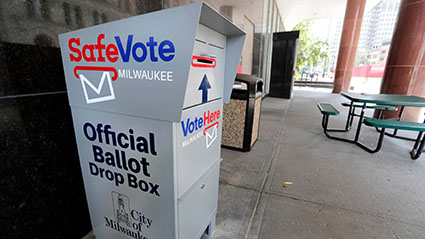 “There’s no authority to do it,” Bohren said, pointing out that state law only allows for absentee ballots to be mailed in or handed in in-person.

The Thursday ruling follows a lawsuit that was filed by the conservative Wisconsin Institute for Law & Liberty (WILL) on behalf of two individuals in June. The lawsuit said that the Wisconsin Elections Commission had incorrectly interpreted election statues as to allow for drop boxes to be used for absentee ballots, saying that “only legally cast votes should count and counting illegally cast votes diminishes the value of those cast legally.”

The Wisconsin Elections Commission’s attorneys argued that the state law could be open to a wider interpretation of those rules.

A deputy counsel for WILL praised the judge’s decision.

“The guidance from the Wisconsin Elections Commission on absentee ballot drop boxes was unlawful. There are just two legal methods to cast an absentee ballot in Wisconsin: through the mail or in-person at a clerk’s office. And voters must return their own ballots,” WILL deputy counsel Luke Berg said in a statement. “We are pleased the court made this clear, providing Wisconsin voters with certainty for forthcoming elections.”