‘A spy is a spy’: Jeanine Pirro warns, ‘Enjoy your freedom Jim, while you’ve got it’

The “days of no accountability and no consequence are over” in the wake of Attorney General William Barr’s testimony that he believes the Trump campaign was spied on, Fox News host Jeanine Pirro said on April 13.

Pirro slammed former FBI Director James Comey as one of a “bunch of Trump haters” who were “trying to stop the man we put in the Oval.” 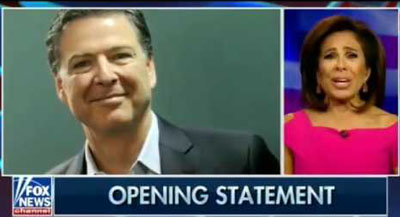 Comey, during a cybersecurity conference in California on April 11, had echoed many Democratic lawmakers who accused Barr of going too far in his Senate testimony last week.

The ex-FBI chief said of Barr’s testimony: “When I hear that kind of language used, it’s concerning because the FBI and the Department of Justice conduct court-ordered electronic surveillance. I have never thought of that as spying.”

Pirro lambasted Comey: “Jim, don’t act so pompous saying we don’t spy. That the word should be the human source and act like you didn’t do what you did. And I don’t care if you call it a spy, human source, intelligent seeker, gatherer or a ghost – a spy is a spy. And a rose by any other name is still a rose. And by the way, in the first application, that you signed, it says that not only do foreign powers engaged in spying on the U.S. to obtain information but that Russia has tried to influence elections since the 1960s.”

Pirro continued: “I’ll bet you never tried to wiretap Barack Obama’s campaign. You couldn’t get Barr to recuse himself and your liberal friends couldn’t either. So, the liberal faculty circus will attempt to destroy him. I got the news. That’s never going to happen. The days of no accountability and no consequence are over. Jim, history will not work kindly on you. Bill Barr is everything you are not: a quiet professional, someone who understands that lady justice is blindfolded for a reason. The days of lies and coverups are over. Enjoy your freedom, Jim, – while you’ve got it.”