Since housing, recreational, and meal-service infrastructures on U.S. college campuses are often underutilized during the summer, why not open them up to illegal immigrants and their families, a a senior fellow at the Hoover Institution proposed.

The “half-empty residence halls at American colleges and universities” could “help house families from Central America and Mexico who await adjudication of their asylum claims,” Victor Davis Hanson wrote for National Review. 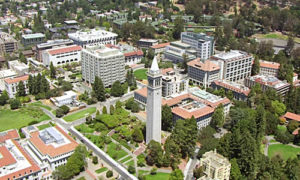 After all, Hanson noted, American college campuses “are also bastions of liberal activism, proud of both their diversity and their expertise in dealing with sensitive matters of acculturation.”

Hanson continued: “What better first glimpse of America could be offered to immigrants than the energy, pastoral beauty, and hospitality of a quiet college quad or well-maintained residence hall?”

“It also makes no sense for college students to venture far and wide for internships when they could be enlisted on campus over the summer to tutor children from Central America and monitor their safety and treatment,” Hanson wrote.

Yet, “the huge, multibillion-dollar market capitalizations of West Coast giants such as Amazon, Apple, Google, Facebook, and Yahoo have so far not led to more affordable housing, more diverse top-flight public K-12 schools, or a growing middle class energized by new arrivals from Mexico and Central America,” Hanson wrote.

“Instead, despite the rhetoric of inclusion, and televised and tweeted fury at U.S. Immigration and Customs Enforcement (ICE), the progressive left coast is among the most exclusionary of all American communities.”

Hanson continued: “Zoning and environmental laws drive immigrants into enclaves and ghettos. Gentrification ends up in the eviction of the first-generation immigrant poor from already overpriced rental units.

“It is almost as if the louder one rails about unfair border enforcement, the more likely one is to avoid encounters with illegal immigrants. Outrage has become a safe way for elites to signal their virtue, acting out in theory what they are uncomfortable doing in fact.”

Will the Hollywood elites be willing to “live among newly arrived immigrants, associate with them as equals rather than as the help, and promote public schools by ensuring that their own children and grandchildren attend them,” Hanson wrote.

“It is easy to invoke the Nazis and the Holocaust to express anger at the temporary detention of children and their families who have entered the U.S. illegally. It would be far more meaningful if marquee journalists, actors, academics, and activists knew immigrants not just as a distant abstract cause, or as nannies and landscapers, but as their neighbors, their children’s school friends – and their social equals.”