A closer look at AOC’s ideas: They are communist and insane, but I repeat myself

Rep. Alexandria Ocasio-Cortez is leading the Democratic Party off a cliff. AOC, as she’s commonly known, is a radical socialist whose ideas are pushing the Democrats to the hard left — and to possible defeat and political oblivion.

Her Green New Deal has nearly 50 Democrat co-sponsors in the House. Besides Massachusetts Sen. Ed Markey, who sponsored AOC’s bill in the Senate, other top Democrats have embraced it: Bernie Sanders, Kamala Harris, Elizabeth Warren, Cory Booker and Kirsten Gillibrand. This 29-year-old woman-child is driving the liberal agenda. 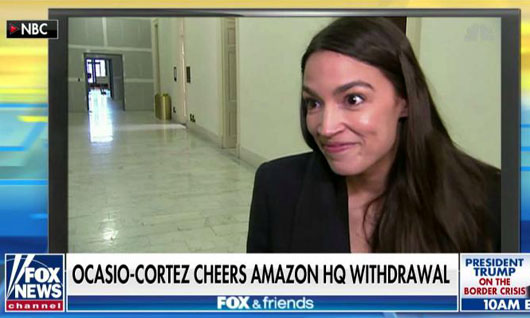 “I’m the boss,” she recently said.

AOC is right. Yet, if implemented her Green New Deal would be a catastrophe. It is a form of milquetoast communism — it calls for “Medicare-for-all,” a single-payer government-run health care system; it demands the federal government provide a job (at a “living wage”) for every adult; it insists the government provide a basic income (welfare) to any individual, even those “unwilling to work”; it champions free college and universal public pre-k education; it wants to ban all meat consumption; it mandates the end of all fossil fuels within ten years to combat “climate change”; it dictates that 99 percent of all gas-powered cars, SUVs and trucks be taken off the road; it demands a ban on all airplane travel by 2030; it aims to outlaw nuclear power; and it seeks to retrofit every building and home in the U.S. so they can be “energy-efficient.” AOC proposes that America becomes completely powered by clean, renewable energy resulting in “zero carbon emissions,” primarily through alternatives such as wind and solar.

And this miracle transformation must take place within a decade. Why? Because AOC claims there’s a “scientific consensus” that, unless drastic action is taken, the planet has only 12 years before it is destroyed by climate change. She says it is her generation’s “World War II” — a life-death struggle against the forces of darkness. Call it the coming green apocalypse.

It is nonsense, environmentalist hysteria masquerading as science. Man-made climate change is a hoax; there is no climate crisis. Rather, the climate has been changing since the inception of humanity. AOC is a typical narcissistic, ignorant socialist millennial — she’s unable to understand that events have occurred before her lifetime.

There is something called history.

Ocasio-Cortez has obviously never heard of the Ice Age or the great medieval warming period. All of which occurred centuries before the Industrial Revolution and the use of fossil fuels. Throughout history global temperatures have gone up or down independent of human activity.

Moreover, AOC is not simply a fear-monger, but a fantasist. Even if by some miracle, the U.S. could create a society with zero carbon emissions — including getting rid of “farting cows” — it would do little to reduce global carbon levels. The reason is obvious: China and India. Those two rising economic giants are the biggest emitters of CO2 and the worst polluters on earth. If the radical left wants to save the planet, forget America and focus on Beijing and New Delhi. In fact, America already has one of the cleanest economies (along with Canada and Western Europe) in the world.

This, however, means nothing to AOC and her fanatical supporters. Climate change is an excuse to impose state socialism and economic collectivism — empower Big Government to sweep away American capitalism and usurp individual liberties and freedoms. The new green is the old red; it is Marxism under the guise of chic environmentalism.

The Green New Deal would collapse the U.S. Its total cost would be at least $93 trillion, according to the American Action Forum, a think tank which studied the plan. It is run by Douglas Holtz-Eakin, who directed the non-partisan Congressional Budget Office from 2003-2005.

This means that the financial tally would be over four times our national debt. It would cost each U.S. household more than $600,000. Should it pass, America would be turned into Venezuela within weeks if not days.

More ominously, only by erecting a dictatorship could it achieve its utopian goals. The Constitution forbids the federal government from nationalizing the economy, as well as the health care, energy and transportation sectors — never mind guaranteeing universal welfare and full employment or outlawing cars, planes and cheeseburgers. The Green New Deal would not only destroy our constitutional republic, but pave the way for an authoritarian socialist regime.

AOC is a wannabe radical leftist thug. She tolerates no opposition or dissent. She has now put moderate Democrats on notice: Vote with Republicans on any issue and they will be put on a “list” of political enemies.

Like all Marxists, Ocasio-Cortez wants to dictate what we can drive, drink, eat or say. She champions central economic planning and repressive state control. By adopting her Green New Deal, Democrats are openly flirting with communism.

This is not only un-American. It is insane.

A closer look at AOC’s ideas: They are communist and insane, but I repeat myself, Jeff Kuhner, WorldTribune.com