Goliad County Sheriff Roy Boyd is a seventh-generation Texan whose ancestors fought and died in the American Revolution and the Texas Revolution.

While his ancestors fought the Mexican military and other incursions, Boyd is battling criminal cartels involved in the trafficking of humans and drugs empowered, he says, by the open border polices of Team Biden. 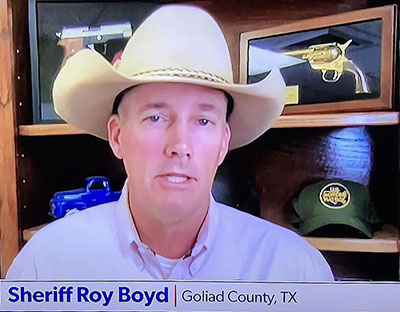 Goliad County is rural, roughly 850 square-miles, and has only two stop lights. Its population is 7,400.

“My family did not fight and die in the American and Texas revolutions for nothing. They believed in the right to independence and the importance of the individual. They helped establish a sovereign United States, the Republic of Texas, and the State of Texas. Now we find ourselves in trying times once more. Oppression is knocking at our door. It is our turn to stand up and do what is right. We will either be victorious in our efforts, or future generations will suffer for our failure,” Boyd told Just the News’s The Center Square.

Goliad is literally in the middle of the criminal cartels’ primary route from Mexico to Houston, being a 2.5-hour drive to both.

Boyd told The Center Square: “As Texans, we don’t conduct ourselves out of a desire for attention or recognition. The Bible warns us about such selfishness. … It’s our duty to preserve the heritage that our forefathers fought and died for so that our children and their children can continue to be blessed as their ancestors have been to live in a free and independent state and nation.”

Of his efforts to thwart criminal activity stemming from the border crisis, he said: “Our task is demanding. We struggle against foreign invasion and elements of our own government simultaneously, but we must persevere. It’s a tireless and often misunderstood mission that we’ve taken on. But who wants to be known as the generation that lost our once great nation to the evils of those who work to strip free people of their birthright?

Boyd says his team is on track to make 500 arrests this year, up from 77 in previous years.

Potential criminals are warned by a sign at one county entrance. Translated from Spanish, it reads: “WARNING!!! Traffickers of drugs and humans turn around. Do not enter Goliad County or we will hunt you down and throw you in jail.”