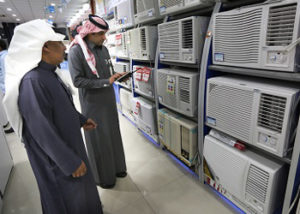 Is it any wonder that Saudi Arabia uses 70 percent of its electricity for air conditioning?

Researchers at King Abdulaziz University in Jeddah said that electricity use for air conditioning doubles in the summer months, when temperatures regularly exceed 100°F (38°C).

The researchers said demand for desalinated water in Saudi Arabia continues to climb at a rate of roughly 14 percent, adding the upward trend is “unsustainable.”

The researchers said a major problem is that 100 percent of Saudi Arabia’s electricity is generated by burning fossil fuels. As of 2017, 59 percent of the kingdom’s electricity came from oil and 41 percent from natural gas.