The world has only nine years to avoid a “critical climate change threshold,” a group of climate elitists proclaimed at the UN COP27 climate conference in Sharm El Sheikh, Egypt on Friday. 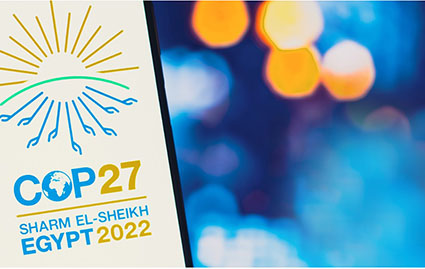 A slew of climate change elites arrived at the coastal city in 400 private jets. They did not say how much time flying some 400 private jets to one event that could have been fully video-conferenced lopped off that “threshold.”

Citing the yearly Global Carbon Budget report, Zack Budryk wrote in The Hill on Friday that humans must radically reduce consumption of fossil fuels to avoid crossing the 1.5-degree warming threshold, warning that at current levels that threshold will be reached in just nine years.

Leaders meeting at COP27 “will have to take meaningful action if we are to have any chance of limiting global warming close to 1.5°C,” Pierre Friedlingstein, the Global Carbon Budget report’s lead author, said. “The Global Carbon Budget numbers monitor the progress on climate action and right now we are not seeing the action required.”

Apparently, the COP27 conference itself was exempted from any “meaningful action” on limiting global warming.

“The rank hypocrisy from globalist elites is not out of character, with a similar number of private jets flying to last year’s COP26 conference in Glasgow, with even then-Prince Charles and Boris Johnson opting to fly private despite living in the same country, with rail networks available,” Breitbart’s Kurt Zindulka noted.

The 33,000 attendees at the UN summit were provided with gourmet meals consisting of meat, fish, and dairy products. Many of those same attendees, including the UN, are pushing for all of the Earth’s non-elites to start eating more “sustainable” food sources, such as insects and lab-grown meat substitutes.

German reporters noted that the facility hosting the climate summit was blasting the air conditioning so cold that people were bundling up with scarves and other winter accoutrements.

“Humanity has a choice: cooperate or perish,” UN chief Antonio Guterres told the summit on Nov. 7.

Doesn’t look like the UN chief demanded the same cooperation from the 33,000 in attendance at COP27.