35 percent in poll say 2020 election should be overturned

As a Wisconsin sheriff documented state election law violations at a press conference Thursday, a new Morning Consult-Politico survey found that 35 percent of registered voters believe the 2020 presidential election should be overturned. 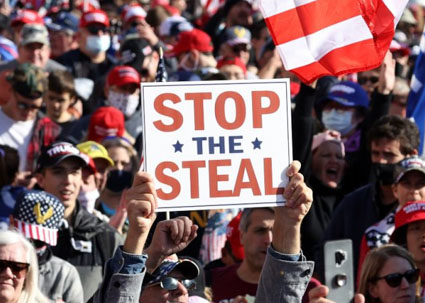 Asked whether the 2020 presidential elections was “free and fair,” 56 percent of registered voters said yes, “definitely” or “probably;” 37 percent said definitely not or probably not. A total of 7 percent didn’t know or had no opinion.

A whopping 68 percent of Republicans said the election was not fair, as did 37 percent of independents and only 9 percent of Democrats.

“The elections statute was in fact, not just broken, but shattered by members of the WEC,” Schmaling said.

State law dictates only “special voting deputies” or family members are allowed to assist others with absentee ballots.

Sheriff Schmaling stated that investigators believe this happened in most of the nursing homes in Wisconsin, but that they would enforce the law as it pertained to those in Racine County’s 11 nursing homes.

“There are 72 counties in Wisconsin making for hundreds of nursing homes subject to this abuse, and hundreds of ballots were used in each of the nursing homes,” OAN’s Christina Bobb noted on Thursday. “Based on just nursing home abuses and election fraud, there could be as many as 50,000 to 100,000 fraudulent ballots cast in Wisconsin during the 2020 election. Biden supposedly won the state by 20,682. This is more than enough fraud to have changed the outcome of the election.”

Will Thursday’s revelations pave the way for Wisconsin to be the first state to decertify its 2020 election results?

“The Wisconsin Election Commission orchestrated a criminal and fraudulent election,” Bobb said. “The sheriff has said that he is referring the crimes to the Racine District Attorney, Patricia Hanson. Hanson is an elected Republican and will be called upon to prosecute these crimes. At the same time, the Wisconsin legislature has more than enough evidence to show that the results certified in 2020 are fraudulent and must be decertified. It’s incumbent upon the Republican state legislature to stand by the laws they pass and not allow criminal activity to overrule law and order. The Wisconsin State Legislature is primed to decertify their election. Will they?”

Christopher Schmaling, Racine County, Report: Wisconsin could be first to decertify; 35 percent in poll say 2020 election should be overturned, WorldTribune.com