A group of 3,000 sheriffs from around the United States warned Congress against enacting any immigration deal that includes a cap on the number of illegals Immigration and Customs Enforcement (ICE) can hold.

Legislation being discussed would put a cap on those ICE can hold at an average of 16,500. 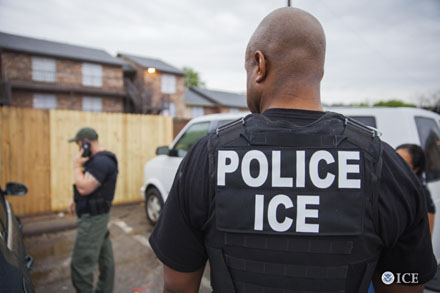 If the legislation were to become law, ICE would be required to release more than 9,000 illegals, at least 90 percent of whom are criminals, the sheriffs said in letters to House and Senate negotiators.

“On behalf of the more than 3,000 sheriffs represented by both the National Sheriffs’ Association and the Major County Sheriffs of America we write in opposition to Congress’ most recent deliberation to place an artificial cap on Immigration and Custom’s Enforcement’s detention capacity,” the sheriffs wrote. “Capping the number of detention beds utilized by ICE not only jeopardizes the integrity of the immigration system, but would cripple ICE’s ability to detain criminal aliens and other aliens who pose a risk to public safety or are a flight risk.”

The sheriffs said that, to achieve the 16,500 cap for the remaining seven months of the fiscal year, “a net reduction of 9,264 adults by the end of this fiscal year would be required.”

Democrats are reportedly refusing to grant President Donald Trump any funding for a border wall without the cap on the number of illegals ICE can hold.

“Talks have broken down because Senate Republicans are refusing to compromise on limits to the Trump administration’s cruel immigration policies,” a senior Democratic aide told Fox News on Feb. 10. “A deal that includes new physical barriers must also include limits on the number of ICE detention beds. If Senate Republicans won’t compromise with us on both, we can’t reach a deal.”

Added a GOP source: “The wall is a red herring for the Democrats. We got stuck on an interior enforcement cap,” meaning a possible limitation on the number and type of enforcement actions ICE agents are allowed to take against illegal immigrants, including violent criminals.