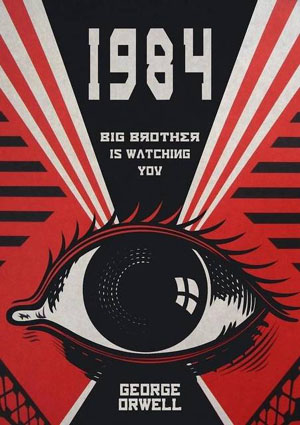 As of Sunday morning, Amazon book sales showed “1984” to be the top-selling book.

The classic novel depicts how government Thought Police eavesdrop on citizens in their own homes, searching for heresy of any kind. Anyone whose beliefs deviate from the official norm are declared “unpersons” who never existed.

Reviewers on Amazon drew parallels between the book’s plot and current events in the United States.

“Born and living in communist Romania I went through the same ordeal described in 1987,” wrote Constantin Turculet, who is listed as making a verified purchase. “After 40 years I managed to escape to America, only to find after 35 years of living in freedom that this country is pushed toward the same horror scenario I thought mankind will never forget.”

Another verified buyer, Jordan Edwards, noted that the book was well written. “Unfortunately it seems like the Left is using it for their playbook right now,” Edwards wrote. “Scary.”

Susan Katz Keating noted for Just the News that the spike in sales of “1984” comes amid a rush of shutdowns in which these moves occurred in rapid succession:

Twitter on Friday booted Donald Trump from its platform and erased the entire history of his tweets;
Facebook deleted a grassroots organization for disenchanted Democrats, WalkAway;
Apple and Google banned the messaging platform Parler from its app stores;
and Amazon said it imminently will ban Parler, which is used by many conservatives, from company servers.

Willamette Week reported: “Responding to customer outcry, Powell’s Books announced Monday it would not carry in its stores a book by the conservative pundit Andy Ngo critical of Portland anti-fascists, but would continue to sell it online.”

Ngo’s book will be published by Hachette on Feb. 21.

The report noted: “Several dozen people protested outside the front doors of Powell’s City of Books on West Burnside Street on Monday afternoon, blocking the front doors, and pledged to return Tuesday morning. Others criticized Powell’s for bowing to pressure about which books it would stock.”

KOIN 6 reported that the store ended up closing for the day and customers were ushered out another exit.

In response to an inquiry from Willamette Week, Ngo said he was disappointed: “Given that Powell’s dedicates part of every year to banned and censored books, it’s a shame they’ve made the decision to restrict in-store sales of a book by a local author weeks ahead of release. However, I also have sympathy for them given how ruthless Antifa have been in vandalizing and hurting local businesses.”