A year ago this week, U.S. Border Patrol Agent Brian Terry was murdered. He died protecting his country from brutal Mexican gangsters. Two AK-47 assault rifles were found at his death site. We now know the horrifying truth: Agent Terry was killed by weapons that were part of an illegal Obama administration operation to smuggle arms to the dangerous drug cartels. He was a victim of his own government. This is not only a major scandal; it is a high crime that potentially reaches all the way to the White House, implicating senior officials. It is President Obama’s Watergate. 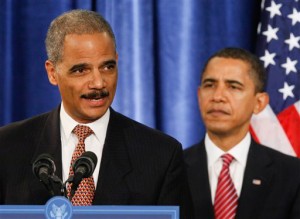 Operation Fast and Furious was run by the Bureau of Alcohol, Tobacco, Firearms and Explosives (ATF) and overseen by the Justice Department. It started under the leadership of Attorney General Eric H. Holder Jr. Fast and Furious enabled straw gun purchases from licensed dealers in Arizona, in which more than 2,000 weapons were smuggled to Mexican drug kingpins. ATF claims it was seeking to track the weapons as part of a larger crackdown on the growing violence in the Southwest. Instead, ATF effectively has armed murderous gangs. About 300 Mexicans have been killed by Fast and Furious weapons. More than 1,400 guns remain lost. Agent Terry likely will not be the last U.S. casualty.

Mr. Holder insists he was unaware of what took place until after media reports of the scandal appeared in early 2011. This is false. Such a vast operation only could have occurred with the full knowledge and consent of senior administration officials. Massive gun-running and smuggling is not carried out by low-level ATF bureaucrats unless there is authorization from the top. There is a systematic cover-up.

Congressional Republicans, however, are beginning to shed light on the scandal. Led by Sen. Chuck Grassley of Iowa and Rep. Darrell Issa of California, a congressional probe is exposing the Justice Department’s rampant criminality and deliberate stonewalling. Assistant Attorney General Lanny A. Breuer, who heads the department’s criminal division, helped craft a February letter to Congress that denied ATF had ever walked guns into Mexico. Yet, under pressure from congressional investigators, the department later admitted that Mr. Breuer knew about ATF gun-smuggling as far back as April 2010. In other words, Mr. Breuer has been misleading Congress. He should resign — or be fired.

Instead, Mr. Holder tenaciously insists that Mr. Breuer will keep his job. He needs to keep his friends close and potential witnesses even closer. Another example is former acting ATF Director Kenneth Melson. Internal documents show Mr. Melson directly oversaw Fast and Furious, including monitoring numerous straw purchases of AK-47s. He has admitted to congressional investigators that he, along with high-ranking ATF leaders, reassigned every “manager involved in Fast and Furious” after the scandal surfaced on Capitol Hill and in the press. Mr. Melson said he was ordered by senior Justice officials to be silent regarding the reassignments. Hence, ATF managers who possess intimate and damaging information — especially on the role of the Justice Department — essentially have been promoted to cushy bureaucratic jobs. Their silence has been bought, their complicity swept under the rug. Mr. Melson has been transferred to Justice’s main office, where he serves as a “senior adviser” on forensic science in the department’s Office of Legal Policy. Rather than being punished, Mr. Melson has been rewarded for his incompetence and criminal negligence.

Mr. Holder and his aides have given misleading, false and contradictory testimony on Capitol Hill. Perjury, obstruction of justice and abuse of power — these are high crimes and misdemeanors. Mr. Holder should be impeached. Like most liberals, he is playing the victim card, claiming Mr. Issa is a modern-day Joseph McCarthy conducting a judicial witch hunt. Regardless of this petty smear, Mr. Holder must be held responsible and accountable — not only for the botched operation, but for his flagrant attempts to deflect blame from the administration.

Mr. Holder is a shameless careerist and a ruthless Beltway operative. For years, his out-of-control Justice Department has violated the fundamental principle of our democracy, the rule of law. He has refused to prosecute members of the New Black Panthers for blatant voter intimidation that took place in the 2008 election. Career Justice lawyers have confessed publicly that Mr. Holder will not pursue cases in which the perpetrators are black and the victims white. States such as Arizona and Alabama are being sued for simply attempting to enforce federal immigration laws. Mr. Holder also opposes voter identification cards, thereby enabling fraud and vote-stealing at the ballot box. What else can we expect from one who, during the Clinton administration, helped pardon notorious tax cheat Marc Rich and Puerto Rican terrorists?

Mr. Holder clearly knew about Fast and Furious and did nothing to stop it. This is because the administration wanted to use the excuse of increased violence on the border and weapons-smuggling into Mexico to justify tighter gun-control legislation. Mr. Holder is fighting ferociously to prevent important internal Justice documents from falling into the hands of congressional investigators. If the full nature of his involvement is discovered, the Obama presidency will be in peril.

Fast and Furious is even worse than Watergate for one simple reason: No one died because of President Nixon’s political dirty tricks and abuse of government power. But Brian Terry is dead; and there are still 1,500 missing guns threatening still more lives.

What did Mr. Obama know? Massive gun-smuggling by the U.S. government into a foreign country does not happen without the explicit knowledge and approval of leading administration officials. It’s too big, too risky and too costly. Mr. Holder may not be protecting just himself and his cronies. Is he protecting the president?

effrey T. Kuhner is a radio talk show personality and a columnist at The Washington Times and WorldTribune.com.

Worse than Watergate: The Obama administration’s culpability for gun smuggling and murder added by Editor One on December 16, 2011
View all posts by Editor One →