‘Worse than prostitutes’: Putin says Obama, authors of ‘fake’ dossier are out to undermine Trump

Russian President Vladimir Putin has accused the outgoing U.S. administration of trying to “undermine the legitimacy” of President-elect Donald Trump by spreading what Putin said were false allegations. 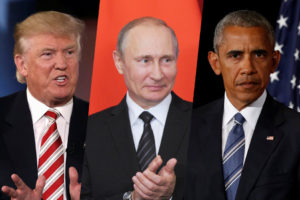 Last week, news reports said a classified intelligence dossier given to President Barack Obama and Trump contained salacious and compromising information gathered by Russia on the Republican president-elect, who rejected the claims as “fake news.”

And earlier this month, U.S. intelligence agencies said they had concluded that Putin ordered a hacking campaign that aimed to undermine U.S. democracy, help Trump, and discredit his opponent in the November 8 election, Hillary Clinton.

Speaking at a news conference on January 17, Putin dismissed the dossier alleging Trump’s sexual activities at a Moscow hotel in 2013 as “fake” and charged that those who ordered it are “worse than prostitutes.”

He also expressed hope that Moscow and Washington could eventually get their troubled relations back to normal.

Trump, who takes office on January 20, has said he wants to improve ties with Moscow.

Relations with Russia have sunk to lows not seen since the Cold War amid rancor over Moscow’s annexation of Ukraine’s Crimean Peninsula in 2014, its backing of separatists in eastern Ukraine, its involvement in the Syrian conflict, and other issues.

‘Worse than prostitutes’: Putin says Obama, authors of ‘fake’ dossier are out to undermine Trump, WorldTribune.com