Democrats and their media lapdogs have assured the nation that there was absolutely no fraud in the 2020 presidential election. 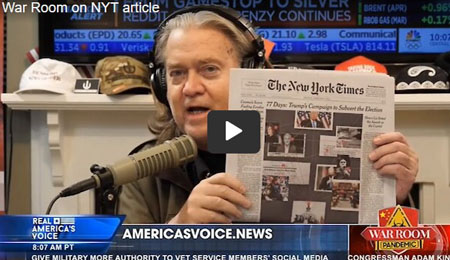 If they are so convinced of that, why are Democrats and the corporate media demanding that former President Donald Trump not be allowed to bring up election fraud during his impeachment trial in the Senate?

The Times proclaimed: “Hours after the United States voted, the president declared the election a fraud — a lie that unleashed a movement that would shatter democratic norms and upend the peaceful transfer of power.”

The Feb. 1 Bannon broadcast noted: “If there was really nothing to the election fraud, the political establishment and the media would welcome the argument. But they won’t. The last thing they want is for President Trump to show all of the damning evidence in the well of the Senate.”

“If they thought Trump had nothing, they would want Trump to roll in,” said Bannon.

Raheem Kassam said the New York Times article is 10,000 words long “and 9,000 words are opinion.” And their opinion is clear: they want a fixed fight for the impeachment trial where voter fraud cannot be mentioned.

John Fredericks says the “Deplorables” want to hear from President Trump directly and to have all the evidence presented.

“They want their day in court, they’ve never had it,” Fredericks said. “They simply want a hearing. And they want President Trump to lead it.”

Bannon says there is no other way to persuade the country, and no better forum than for Trump to return to the Swamp to make his case.