On May 19, 35 Republicans (see list below) voted in favor of the Democrats’ partisan commission to “investigate” the events of Jan. 6 at the U.S. Capitol.

Those Republicans “all deserve a rhino-plasty — that’s my new catch phrase for being primaried and kicked out of Republican politics. (They can keep their noses, just not their seats in Congress),” Roger Simon, editor-at-large for The Epoch Times, wrote on Wednesday. 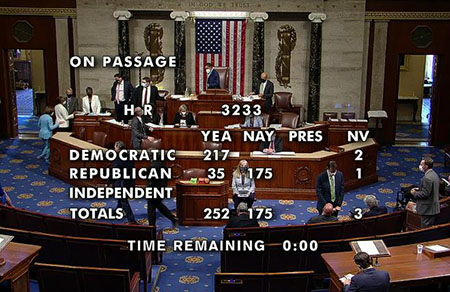 Democrats and their corporate media propaganda arm continue to depict anyone who was at, near, or supportive of the Jan. 6 rally in Washington as “insurrectionists.”

But who are the real insurrectionists?

As Simon noted, those at the Jan. 6 rally are “true patriots, trying, in their clumsy way, to get their country back — or what they thought was their country.”

The real insurrectionists, Simon wrote, “are the people accusing” the Jan. 6 protesters of insurrection. The accusers demanded the 9/11-style commission passed by the House on Wednesday to “study this non-existent insurrection, are the ones taking over our country and imposing their will on the people.”

Simon continued: “And they’re doing this after an election that has never had its fairness investigated and about which no one can say — other than pronouncing an opinion as fact — who was victorious. They have, as the courts would say, no standing.”

Those on the Left who demanded the commission are the same people “who likely grew up praising George Orwell’s prescience in ‘1984’ and ‘Animal Farm’, but are now unaware that they have become true avatars of the former’s ‘Ministry of Truth,’ all the while happily enacting roles in the latter,” Simon wrote.

“They’re the new fascists ‘sans le savoir’ and are busy giving quarter to their brother and sister totalitarians around the world while claiming the greatest danger to our country comes from the people they call ‘white extremists,’ such as the misbegotten guy with the horns or the other ‘must-be-worse-than-a-serial-killer’ goofball who had the temerity to put his feet up on Nancy Pelosi’s desk,” Simon wrote.

“Never mind the genuinely violent maniacs running around Portland and Seattle, damaging as much as they can of persons and property for over a year and making those once-beautiful cities virtually unlivable. No one pays attention to them — especially Democrats. No one locks them up without bail for months.”

The Jan. 6 accusers, “whoever runs” Team Biden and their “ever-so-willing cohorts in what we formerly might have called the Department of Justice are doing many things far worse for our country” than those who entered the Capitol “could have even conceived,” Simon continued.

“If you think I’m hard on the Democratic Party, well, I am. I can’t stand them. And I was once a Democrat.”

Tal Bachman put it succinctly in his May 14 article for American Greatness titled “The Republican Party Sucks”:

The brute fact is that the Republican Party today—unlike its original incarnation—has no rootedness in any specific moral conception of political life. It is an unmoored, mercenary instrument for hire. And members of a would-be permanent ruling caste have hired it.

That’s why to the extent the pre- and post-Trump Republican Party represents any kind of philosophy at all, it is an economic neoliberalism which in practice enables, and acts as cover for, a crony capitalism heading toward state capitalism — the full fusion of big business and big government into one giant blob of increasingly totalitarian control freakery.

As Simon noted, “with the exceptions of Sens. Josh Hawley and Ted Cruz, none of them stood up for the Constitution and electoral fairness on Jan. 6.”

And now, 35 of “these same cowards” have backed the Jan. 6 commission.