Who is Judge Christopher Cooper? The sentencing of Jan. 6 prisoner Simone Gold

Judge Christopher Cooper of the U.S. District Court for the District of Columbia sentenced Dr. Simone Gold of America’s Frontline Doctors to 60 days in federal prison for entering the Capitol building on Jan. 6, 2021.

Gold and her supporters were stunned that Cooper, 55, had not been recused from the case since he and Gold had attended law school together where Gold said she had rejected Cooper’s romantic advances.

“The fact that I went to law school with this person and the fact that he didn’t recuse himself and then [what] he revealed during sentencing … I felt was such incredible bias,” Gold told The Epoch Times.

Trump White House adviser Garrett Ziegler noted in a Telegram post: “Novel concept by Cooper: Get back at the chick who turned you down in law school by handing down an extreme sentence. (Now, to be fair, why Gold’s attorneys did not file a motion for recusal is beyond me. It was retarded. Don’t play roulette w Bolsheviks).”

Gold also thinks that the judge was “furious” at her and her organization, America’s Frontline Doctors, for raising money and thought it was “very strange” that he read her support letters.

Cooper ruled that Gold’s prison sentence will be followed by 12 months of supervised release, and ordered her to pay a $9,500 fine.

Gold said that, after they had previously exchanged pleasantries, she ran into Cooper at school and they talked for about 10 minutes.

“And then he asked me on a real date,” she said. “And I declined, because I just didn’t see any future for him and me, but I remember him fondly like, I didn’t remember much at all, but to the extent I remembered him, it was perfectly pleasant.”

Gold surrendered herself to the federal detention center in Miami at 2 p.m. on July 26.

Gold was initially charged with entering a restricted building or grounds, violent entry, and disorderly conduct, and arrested on Jan. 18, 2021. She spent two days in custody. On March 3, 2022, she pleaded guilty to the misdemeanor charge of illegally entering the restricted building.

While inside the building, Gold delivered a speech through a megaphone to a crowd gathered in Statuary Hall, where she stated her opposition to the Covid vaccine mandates and government-imposed lockdowns.

Cooper also presided over the case of Michael Sussmann, who was acquitted by a D.C. jury after being charged by special counsel John Durham with lying to the FBI in September 2016, when he approached the bureau’s top lawyer James Baker with what he described as evidence of links between Trump Tower and Alfa Bank.

In the Sussmann case, media reports noted that Cooper had spared the Hillary Clinton campaign and the Democratic National Committee the potential embarrassment of a federal judge finding they were part of a coordinated effort to level discredited allegations against then-candidate Donald Trump. 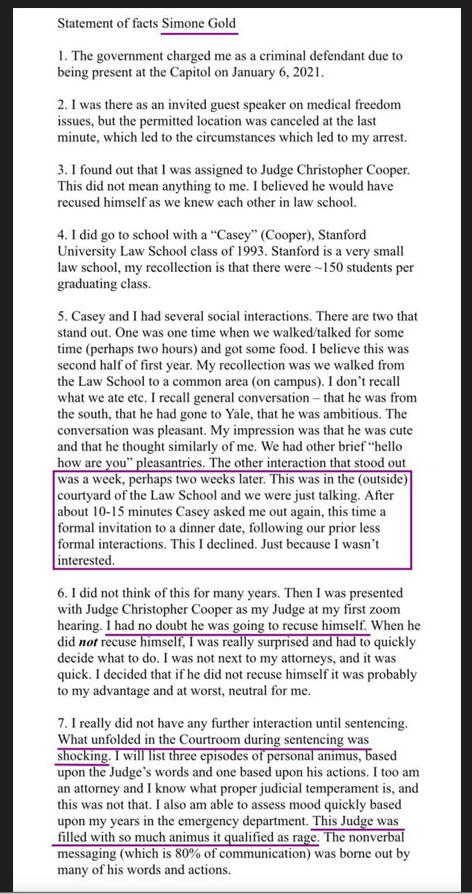 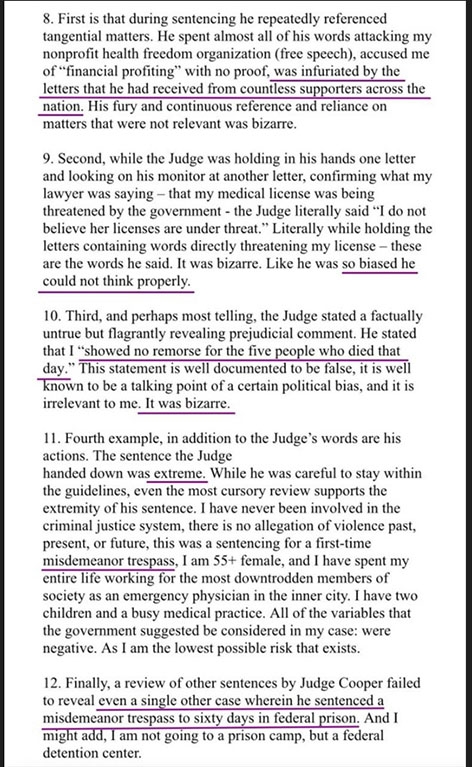 Who is Judge Christopher Cooper? The sentencing of Jan. 6 prisoner Simone Gold added by Editor Two on August 5, 2022
View all posts by Editor Two →