Former President Donald J Trump has been silenced by the mega media, but apparently he is not gone. The invisible man is out there somewhere.

During a Wednesday town hall on Fox News’s “Hannity,” several red state governors confirmed that Donald J Trump remains at the head of the Republican Party and his America First agenda continues to pave the way. 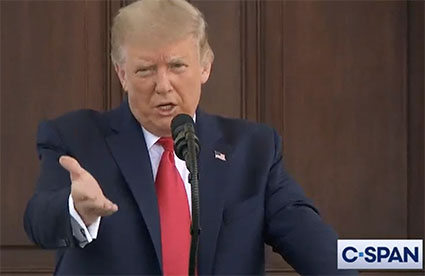 Communicating through his website, Trump on May 25 cited a new Reuters/Ipsos poll which showed the 45th president still has strong support in the GOP.

Turning to the Marciopa County audit, Trump noted that “Arizona Republican State Senators are engendering such tremendous respect, even adoration, for the great job they are doing on the Forensic Audit of the 2020 Presidential Election Scam. Our Country is watching as early public reports are indicating a disaster, far greater than anyone had thought possible, for Arizona voters.”

As of May 14, 660,000 ballots were completed, and the goal is to finish counting the ballots by June 30, audit director Ken Bennett said.

“The audit has resumed but The MCBOS (Maricopa County Board of Supervisors) refuses to cooperate with The Senate and their subpoenas. As the week continues, hopefully, they can give us some answers on that chain of custody documentation, duplicate ballots, pink slip discrepancies as well as compliance with the subpoenas,” Bennett told Gateway Pundit.

Meanwhile, Trump continues to use his website to get out his message as social media platforms and some “conservative” media would have you believe he has virtually disappeared.

“My website is a place where everyone can see my statements, issued in real time, and engage with the MAGA Movement,” Trump said.

“This is meant to be a temporary way of getting my thoughts and ideas out to the public without the Fake News spin, but the website is not a ‘platform.’ It is merely a way of communicating until I decide on what the future will be for the choice or establishment of a platform. It will happen soon. Stay tuned!”

The Washington Post, Trump said, “also incorrectly reported about my DonaldJTrump.com website viewership. We have not yet launched our own social media ‘platform,’ but even the very basic site we have to post our statements has received 36.7 million views over the past month alone, and we’re getting more traffic to our website now than in 2020, an Election year! This number would be even greater if we were still on Twitter and Facebook, but since Big Tech has illegally banned me, tens of millions of our supporters have stopped using these platforms because they’ve become ‘boring’ and nasty.”

Trump on May 24 cited a poll by John McLaughlin which found 73 percent of all Republicans want Trump to run again in 2024 and Republican primary voters would support him 82%-13%.

“Even the Washington Post has just reported ‘All Republican Roads Lead to Mar-a-Lago,’ ” Trump noted.

“What WaPo and other members of the Fake News Media don’t report is that Joe Biden is of no interest to anybody — 21 million less people watched his Joint Address to Congress than watched mine,” Trump added.

Trump continued: “I have been doing very limited media so the American public could see just how big of a disaster the Biden Administration has been, and I was right. Inflation, the Border Crisis, our forgotten Military, war in the Middle East, all as a result of Biden’s mistakes. Our Country is being destroyed. Watch, it’s only going to get worse!”