The absence of a father in the home “is the No. 1 cause of nearly all social ills we face” and “we can’t afford to ignore it any longer,” a columnist wrote.

“It has been 50 years since feminists first began to make the claim that women don’t need men, and by every statistical measure we are worse off because of it. How much longer are we willing to stay silent?,” Suzanne Venker, who is also an author and relationship coach, wrote for the Washington Examiner. 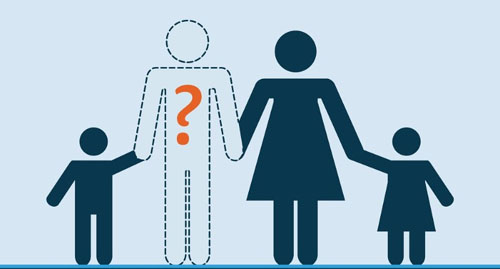 The two most significant threats to a father’s presence in the home are divorce and out-of-wedlock births, Venker noted.

“It’s the breakdown of marriage, in other words, or the collapse of the family, that results in father-absent homes. Whether you feel its pain directly or not, it affects you.”

Genevieve Wood at the Daily Signal noted that “Families are the building blocks of civilization. They are personal relationships, but they greatly shape and serve the public good. Family breakdown harms society as a whole.”

How did the family fall apart? “When we stopped valuing men and marriage,” Venker wrote.

“There was a time, believe it or not, when marriage was highly valued. Ergo, the majority of Americans married. They even looked forward to it! It was an honorable mark of adulthood to leave one’s family of origin and build a family of one’s own.”

“And with it,” notes Dennis Prager in his “Fireside Chat” on marriage and children vs. career, “the notion that ‘a woman without a man is like a fish without a bicycle.’ ”

Venker noted that “This mantra was glamorized (though not coined) by Gloria Steinem in the 1970s and was quickly inculcated both in Prager’s generation and those that followed. Prager rightly defines America’s new narrative, which is directed specifically to women: ‘You don’t need a man; you need a career. Then you’ll be happy.’ ”

Since this narrative first took hold, “America has undergone a sea change with respect to men and marriage,” Venker wrote. “Marriage began to be viewed not as a given but as a possible accompaniment to a woman’s otherwise more important and exciting independent life — and men went along for the ride. What choice did they have? Then, sometime later, America upped the ante with a full-scale war on men and, more recently, with an attack on men’s very nature.”

Venker continued: “Men and boys have heard this message loud and clear, and as a result have stepped back or stopped trying. Boys are failing to grow up and make something of themselves because they lack fathers who can help them do just that. They lack fathers because America has made it clear that men are superfluous and even dangerous to women and children.”

The nuclear family, Venker noted, “is the foundation of America’s greatness; and a dearth of productive men invariably means, as Tucker Carlson noted in January, the subsequent disintegration of marriage.

“These two cannot be separated. Women don’t want to marry unemployed men or men who have no purpose. But women do want children and will go to great lengths to have them in unconventional ways. Thus, children (boys especially, since girls will still have their mothers) will remain fatherless, and the cycle will continue.”

Venker continued: “It is time for people to say ‘Enough!’ We cannot survive as a nation without strong and competent men raising strong and competent boys who become the kind of men that women want to marry. We know those in power will do nothing about it; they’ve already proven it in spades.”

Heather Mac Donald told recently told Carlson: “The elites are absolutely unwilling to send the message that fathers are as important to their children as mothers. Their tongues are tied — they refuse to say it. It’s one of those truths that’s being completely denied by elite culture. Why? Because it violates the feminist nostrum that women can do it all.”