That was then; This is now. 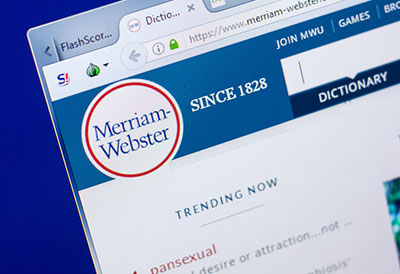 But it has altered its definition of “female” and “girl” to incorporate the woke Marxist gender identity narrative.

The primary dictionary definition of female had long been “of, relating to, or being the sex that typically has the capacity to bear young or produce eggs.”

But a secondary definition has been added, saying the word can mean “having a gender identity that is opposite of male.”

At the confirmation hearing for Judge Ketanji Brown Jackson on March 22, 2022,,  Sen. Marsha Blackburn asked the nominee to define the word “woman.”

“Not in this context. I’m not a biologist,” Jackson said.

“The meaning of the word woman is so unclear and controversial that you can’t give me a definition?” Blackburn asked.

“The stealth addition of gender identity into a dictionary entry on female biological sex shows how successful progressive activists have been in redefining words,” OutKick’s Ian Miller noted. “It’s the same institutional capture that’s led to the University of Pennsylvania nominating a biological man for a ‘Woman of the Year‘ athletic award.”

Popular Twitter account Libs of TikTok also pointed out that the online dictionary also changed the definition of the word “girl” by adding a secondary meaning that says “a person whose gender identity is female.”

To verify the definition had changed, Libs of TikTok posted a screenshot of a web archive page from July 26, 2021 that showed the secondary definition was absent.

During a Senate committee hearing on abortion policy last week, University of California Berkeley law professor Khiara Bridges had a sharp exchange with Sen. Josh Hawley, Missouri Republican, over Bridges’ use of the phrase “people with the capacity for pregnancy.”

When Hawley asked Bridges if she was referring to women, Bridges said that some women can’t get pregnant, just as there are some transgender men and nonbinary people who can get pregnant.

After Hawley pressed her again, Bridges accused Hawley of transphobia and that he “opens up trans people to violence by not recognizing them.”

Miller added: “The motivation leading supposedly authoritative sources of information to fundamentally alter our understanding of language is political pressure. Pressure to conform to the latest demands of progressives and to avoid being labeled as an ‘anti’ by left wing news outlets. The least acceptable outcome for the dictionary is being called a ‘transphobe’ by a prominent liberal Twitter account. So they panic and cave to their demands.

“This redefinition now means that transgender athletes like Lia Thomas are now ‘female’ because their gender identity is the ‘opposite of male.’ For those born as biological males, yourself to be female now means your sex has changed, according to the dictionary.”

It was bound to happen. Merriam-Webster has changed its dictionary definition of “female” to appease the trans activists. pic.twitter.com/qWnslvPjSd