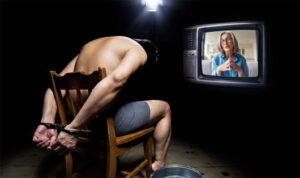 According to anonymous sources, the CIA has replaced enhanced interrogation techniques such as waterboarding with something even more torturous and effective: 12-hour academic lectures on intersectional feminism.

“Waterboarding has been shown to be very effective,” said the anonymous source. “But that’s been replaced now. Now we just pop in a tape of Robin DiAngelo, Stacey Abrams, or Joy Behar. Sometimes we’ll really ramp things up and make them watch Coca-Cola’s diversity training on a 12-hour loop.”

Terror suspects will be subjected to lengthy lectures about cis-male privilege, heteronormative patriarchy, and microaggressive mansplaining.

Waterboarding out; CIA torture team imposes 12-hour lectures on intersectional feminism and heteronormative patriarchy added by World Tribune on May 7, 2021
View all posts by World Tribune →