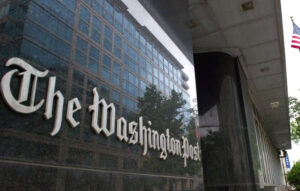 The Washington Post issued a correction revealing it “misquoted” Donald Trump’s comment on a call with a Georgia election official.

The outlet quietly admitted that the former president never asked the state’s top election investigator to “find the fraud,” but rather encouraged the official to “scrutinize” ballots. [The story was repeated by most major U.S. media several of whom claimed they had independently verified it. Democrats used the  quote in the Senate impeachment trial of former President Trump last month.]

The Post’s full, seven-sentence correction attributes the misquote to faulty “information provided by a source”:

Correction: Two months after publication of this story, the Georgia secretary of state released an audio recording of President Donald Trump’s December phone call with the state’s top elections investigator. The recording revealed that The Post misquoted Trump’s comments on the call, based on information provided by a source. Trump did not tell the investigator to “find the fraud” or say she would be “a national hero” if she did so. Instead, Trump urged the investigator to scrutinize ballots in Fulton County, Ga., asserting she would find “dishonesty” there. He also told her that she had “the most important job in the country right now.” A story about the recording can be found here. The headline and text of this story have been corrected to remove quotes misattributed to Trump.