A pair of state representatives in Washington have filed legislation calling for the formation of a 51st U.S. state called Liberty. 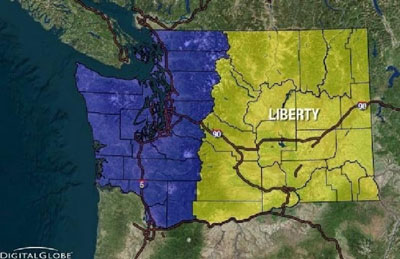 According to the bill, Liberty state’s western border would be along the “crest of the Cascade mountains and the western 8 borders of Okanogan, Chelan, Kittitas, Yakima, and Klickitat counties.” The eastern, northern and southern borders would remain the same.

Supporters of the creation of Liberty say Washington state is “already two states on virtually every major issue of the day,” according to the movement’s website.

In order for the state of Liberty to be created, the bill would need to pass and be approved at the state level, then get the approval of the U.S. Congress.

Shea, who did not seek re-election in 2020, repeatedly, but unsuccessfully proposed a 51st state that would separate eastern Washington from leftist Seattle and western Washington.