Voters for Democrat governors take note: Florida’s DeSantis will not lock down

As Thanksgiving nears, Democrat mayors and governors, and a few RINOs, across the country are imposing new covid stay-at-home orders, curfews and mandates.

Not in Florida where Republican voters can count their blessings. Gov. Ron DeSantis has said he will not put the Sunshine State back into lockdown. 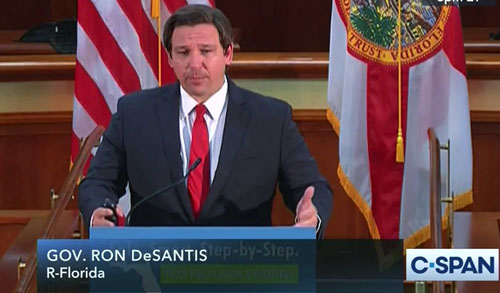 “The governor will not lock down and hurt families who can’t afford to shelter in place for 6 weeks. Especially not for a virus that has a 99.8 percent survival rate,” a spokesperson for DeSantis told CBS 12 News on Monday.

DeSantis reluctantly shut down the state for one month in April but has largely left mitigation efforts up to mayors and individual counties. He has also resisted instituting a state-wide mask mandate.

In September, DeSantis eliminated all covid-related business closures and capacity limitations. Since re-opening in July at 25 percent capacity (recently increased to 35 percent), zero covid outbreaks have been traced to Disney World. DeSantis also eliminated fines associated with all county and municipal mask mandates.

In October, DeSantis said statewide school closures were not a viable option and would not be considered.

“It doesn’t matter if it’s in Asia, Europe, the United States — all across the Sun Belt, all across other parts of our country, we’ve seen that having in-person instruction is vital and it’s something that needs to continue,” DeSantis said. “Going forward, whatever the future may hold, school closures should be off the table.”

“One area of concern is assisted living facilities. Since those over 70 face the greatest threat from covid, the governor is monitoring those numbers daily and is prepared to move therapeutic and prophylactic assets to those facilities as needed,” the spokesperson said.

Unlike many Democrat governors, including New York’s Andrew Cuomo, DeSantis in the early stages of the outbreak ordered that covid-positive patients not be allowed in nursing homes.

“Today we are back down to a 7.3 percent positivity rate,” the governor’s spokesperson said on Monday. “We believe yesterday’s high number was due to a large submission file and skewed the numbers for that day.”

The Florida media reports dishonestly on the pandemic on a daily basis.

Florida’s CBS 12 reported on Nov. 16: “Florida added more than 10,000 new COVID cases in a single day over the weekend, a number the state hasn’t seen since the summer surge.”

The report does not mention that a large chunk of that 10,105 number came from a data dump of previously unreported cases. Several Florida outlets put the number in their headlines to seize on the impact while dishonestly leaving out the part about the data dump.

If the number of deaths reported on a single day hit a certain threshold, that goes in the headline as deaths for that day, leaving out the context that a large number of deaths are not reported for weeks or months after the actual date of death.

When daily cases reported do not hit a certain threshold, the ghouls in the Florida media put the total number of cases since March in their deceptive headlines. Important data such as hospitalization rates and low death rates are omitted completely or relegated to the bottom of articles.