Virginia teacher presses student not to be ‘coy’ about race

During a classroom assignment, a teacher in Virginia’s Loudon County showed a photograph of two females. Students were asked to observe what they saw in the picture.

When one student said he saw “two people chillin’,” and failed to point out racial differences, the teacher said the student was being “intentionally coy” and continued to press the student until he inquired if the teacher was asking him to identify the race of the individuals in the photo. 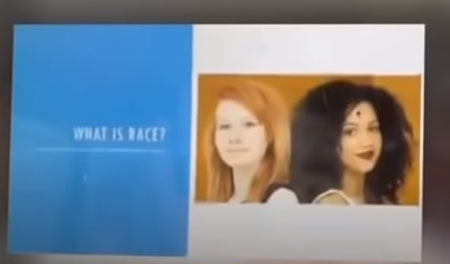 Teacher: Tell me what this seems to be a picture of.

Teacher: Right, just two people. Nothing more to that picture?

Student: It truly is just two people though, is it not?

Teacher: I think you’re being intentionally coy about what this is a picture of.

Student: What am I being coy about? It’s two people standing back-to-back in a picture.

Teacher: Yeah, and that’s all you see? Just two people?

Student: I’m confused on what you would like me to speak on.

Teacher: I don’t think you are. I don’t know why you do this. I’m not trying to call you out, but you … you act as if there’s nothing noticeable about this apart from the fact that there’s two people.

Student: Well I’m confused. Are you trying to get me to say that there are two different races in this picture?

Teacher: Yes, I am asking you to say that.

Student: Well, at the end of the day, wouldn’t that just be feeding into the problem of looking at race instead of just acknowledging them as two normal people?

Teacher: No, it’s not. Because you can’t not look at, you can’t look at the people and not acknowledge that there are racial differences.

In posting the exchange on YouTube, the poster noted that the “teacher is forcing a student to refer to people by race even as the child resists. This is a common critical race theory tactic.”

Parents reportedly emailed the school board demanding they investigate why “Critical Race Theory,” the theory that teaches people that race is a social construct designed to oppress minorities, was being taught in Loudon County Public Schools (LCPS).

Interim Superintendent Scott Ziegler said in a statement: “LCPS has not adopted Critical Race Theory as a framework for staff to adhere to … but does have a Culturally Responsive Framework.”