As the Democratic Party tightens its embrace on socialism, the sin of accepting contributions from big-money donors takes the spotlight. 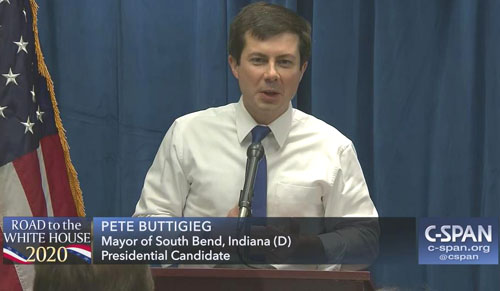 Pete Buttigieg is now under the glare of that spotlight after it was revealed his 2020 presidential campaign is raking in cash from Silicon Valley’s wealthiest families.

“When a candidate brags about how beholden he feels to a group of wealthy investors, our democracy is in serious trouble,” 2020 Democratic presidential hopeful Sen. Elizabeth Warren said of Buttigieg.

Recode reported that a fundraising event for Buttigieg on Monday in Palo Alto, California, featured “individuals with family ties to some of the most prominent people in Big Tech.”

The event’s host list “is a reminder of Buttigieg’s ties to Silicon Valley, which are increasingly becoming front-and-center in the presidential campaign thanks to Elizabeth Warren, who is raising questions about Buttigieg’s relationships with major contributors,” the Recode report said.

During his a trip to Silicon Valley in September, Buttigieg reportedly met at Emerson Collective with billionaire Laurene Powell Jobs.

A Buttigieg spokesperson said in a statement: “We are proud to have the support of more than 700,000 grassroots donors across the country who are helping power this campaign. The only thing people are promised at an event with Pete is that he will use that money to beat Donald Trump.”

The Palo Alto event was one of four Buttigieg fundraisers being hosted in the San Francisco Bay Area and was also the most likely to turn heads, Recode noted.

“The Brin, Schmidt, Hastings, and Sandberg families have a combined net worth of about $80 billion, according to estimates. These co-hosts are promised an ‘intimate meeting with Mayor Pete’ at the coffee fundraiser in exchange for donating $2,800 apiece to his campaign, according to the invitation,” the report said.

“At a moment when Buttigieg is coming under criticism from Warren, any ties to Big Tech will only accentuate her argument about his relationships to Silicon Valley,” Recode said.

Warren’s campaign said she is doing no official fundraising events and has said she is returning contributions over $200 from Big Tech executives.