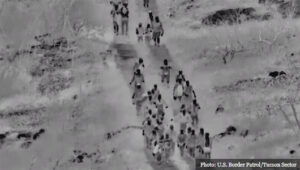 A U.S. Border Patrol source reports the number of migrant “got-away’s” tallied by the agency surpassed 118,000 for this fiscal year. In less than six months, the “got-away” number is nearly double that for all of Fiscal Year 2020.

This particular metric is usually not released by Department of Homeland Security officials. The numbers are achieved by counting illegal immigrants who ultimately escape Border Patrol apprehension after being observed by aircraft platforms and camera systems.

Trump in Arizona: Who knew election was ‘corrupt’? Everyone
Read more