The new disclosure forms are out, and they reveal the latest update on U.S. media companies taking advertising money from a propaganda organ of the Chinese Communist Party. 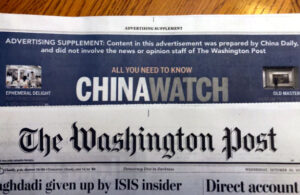 A state-backed Chinese newspaper paid more than $1.6 million for advertising in Western media outlets with a presence in the United States over the last six months, according to disclosure forms filed Tuesday.

The cash China Daily forked over included $272,000 to The Los Angeles Times; $291,000 to Foreign Policy; $371,577 to the British Financial Times; $329,898 to the Canadian Globe and Mail; and $700,000 to TIME Magazine. The figures were included on disclosure forms the Chinese newspaper filed on Tuesday under the Foreign Agents Registration Act, which requires foreign agents to register with the federal government.

These supplements are inserted as advertisements in newspapers or paid programs online.

Researchers looking into Chinese influence activities in the United States said in a 2018 report that “it’s hard to tell that China Watch’s material is an ad.”

The Chinese newspaper frequently pushes controversial claims, and sometimes misinformation, promoted by the Chinese government. It carried a Chinese foreign ministry spokesman’s claim last year that the U.S. started the AIDS crisis, and in January, argued that China’s concentration camps for Uighurs helped women to become more than “baby-making machines.”

China Daily has also been involved in cultivating American governors for propaganda purposes highly favorable to the communist regime. As WorldTribune noted in December and January, Washington Democrat Gov. Jay Inslee offered his state’s sensitive aerospace and rocketry technology to China in a series of interviews with Chinese media organs, including China Daily. And Arizona Republican Gov. Doug Ducey was featured in China Daily urging Chinese businesses to head to Arizona and gain access to the state’s “semiconductors, electronics, aerospace, our defense industry, mining and ores.”

A cursory Internet search of Time Magazine headlines on China shows a markedly friendly tone towards the bloodstained tyranny. Among those to be found:

The opening paragraph to the May 2020 climate change story scolded former President Trump for daring to claim that China may be responsible for unleashing the coronavirus upon the world:

As the coronavirus pandemic rages, the Trump administration’s already-rocky relationship with China has deteriorated. President Trump has sought to blame the country for the public health and economic disaster, for a time calling the new coronavirus the “Wuhan virus” or the “Chinese virus,” and as recently as May 7, spreading unsubstantiated claims that the virus emerged from a lab in Wuhan. On May 14, he went so far as to suggest that the U.S. might “cut off the whole relationship.”

Time wasn’t the only big-box American media organizations carrying water for China on the coronavirus last year. Today, as speculation intensifies as to the true origins of the pandemic, these outlets are starting to be called to account. It’s awfully hard not to notice how many of them have taken Chinese communist advertising money over the years.