Joe Biden wants unity? The triad of politicians, media and Big Tech propping up Biden have made it clear. They want blood.

They are censoring perceived enemies.

They are making lists.

They are naming names. 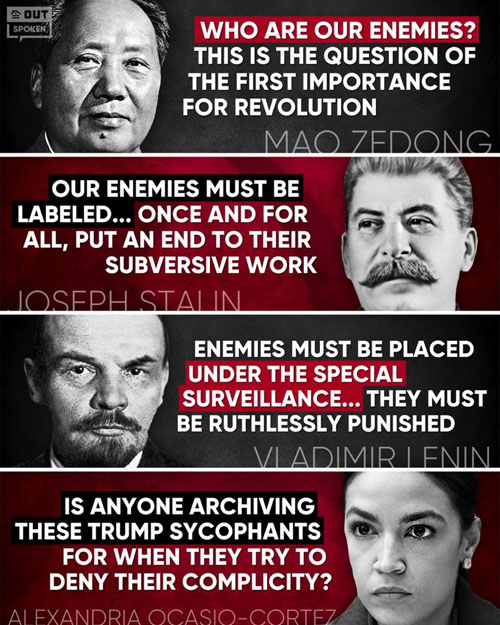 Dan Bongino noted: “You have no idea how bad the shit going on behind the scenes really is right now. DO NOT think for a moment that entities who were your friends are your friends now. The wheat and the chaff are separating.”

A former editorial writer at a D.C. conservative newspaper noted that the Democrats’ “contempt level is off the charts. The AP, Fox and others hurt the country by trying to bulldoze Biden in this way because if the Supreme Court reverses the stolen election the riots will be epic. So we need to be ready for the worst either way.”

Joe Biden’s supporters “are advocating a reign of shunning and purging President Trump’s supporters in Washington,” Rowan Scarborough noted in a Nov. 8 analysis for The Washington Times.

Socialist Rep. Alexander Ocasio-Cortez kicked off the retaliation converstaion for unspecified crimes by urging followers to create an anti-Trump archive as evidence.

“Is anyone archiving these Trump sycophants for when they try to downplay or deny their complicity in the future?” the New York Democrat tweeted. “I foresee decent probability of many deleted Tweets, writings, photos in the future.”

Related: Message to Rep. Ocasio-Cortez from a Trump ‘sycophant’: Please put me on top of your ‘list’, November 9, 2020

As Biden was preaching a unity theme during his Saturday night speech, his backers espoused another idea: Dox and cancel Trump world.

Many scoffed at Biden’s call for “unity” and “healing” considering the Democrat triad’s relentless attacks on Trump and his supporters for the past four years.

Journalist Megyn Kelly tweeted: “Half of the country has been demonized as awful for four years just for supporting their president who was falsely accused of Russian collaboration, wrongly impeached & attacked relentlessly by the L & a dishonest media. And now it’s ‘let’s heal!’ ‘Unity!’ Good luck.”

Kelly added: “You can be as angry as you want. But let’s not pretend after 4 yrs of bare knuckled, brutal, and grossly vicious brawling, now that your guy is ascending to the WH, it’s all over and ‘unity,’ ‘healing,’ peace, love & understanding bc … memory.”

Kelly told political scientist Ian Bremmer: “Ian, you’re out of touch if you think 70m Americans who have been unfairly demonized as the worst of humanity for 4yrs are now going to hug those who’ve viciously attacked them (& are now making lists of their names). I’m talking reality, which is my job, not pie-in-the-sky stuff.”

Lawyer Leslie McAdoo Gordon captured screen shots of the full “Trump Accountability Project” enemies list “before it was hidden & before the judges & donors tabs were removed. I took screen shots of every page before that happened. The list of administration officials is 1202 long so I overlapped the pics to get them all.” (The list can be seen here)

The “Trump Accountability Project” set up a Twitter account and says it will block jobs for, and shame, anyone who worked to elect Trump, staffed his government or funded his campaign.

Hari Sevugan, former spokesman for the Barack Obama campaign, called for a Washington jobs boycott for Trump loyalists and threatened anyone who would hire them.

“Employers considering them should know there are consequences for hiring anyone who helped Trump attack American values,” he tweeted.

Twitter commenters challenged Sevugan, comparing him to such communist dictators as Josef Stalin, Pol Pot and Mao, who engaged in rigged show trials for political ends and routinely purged perceived enemies in murderous rampages such as China’s Cultural Revolution and the Soviet Union’s Great Terror.

Democrat donor Ben Meiselas threatened to retaliate against anyone who hires a Trump associate who remained after the election.

Meiselas runs the super PAC Meidastouch, which raised $2.5 million in 2020 to defeat Trump, according to the research site Open Secrets.org. The PAC has more than $400,000 on hand.

“If you hire someone who remained with the Trump admin after the election, be on notice you will be held accountable by MeidasTouch and we will ensure you are exposed,” Meiselas tweeted.

Bongino responded: “These threats are the desperate cries of a class of infantile losers struggling to find meaning in their empty lives.”

Chris Hayes, a mouthpiece for propaganda outlet MSNBC, and Clinton era Labor Secretary Robert Reich have said America needs some kind of “Truth and Reconciliation Commission,” the term given to panels that operated in post-Apartheid South Africa.

“It would erase Trump’s lies, comfort those who have been harmed by his hatefulness, and name every official, politician, executive, and media mogul whose greed and cowardice enabled this catastrophe,” Reich wrote.

“Like all men who commit crimes against humanity, he should be imprisoned by the society he wounded, forever prevented from spreading his pestilence and fear. In a just world, this reckoning would happen right on Jan. 21. It won’t. But one way or another, he will have to leave that building and its protection, and it’s a day that cannot come fast enough,” wrote Slate’s Lowen Liu.

Joe Lockhart, another Clinton era relic, called for some type of retaliation and punishment for anyone in Trump’s orbit.