‘Unfreedom of the Press’: Levin bestseller hits No. 1 before publication

“The party-press is back, and with a vengeance,” radio and TV host Mark Levin writes in his new book, “Unfreedom of the Press”.

“News outlets are overwhelmingly supportive of the Democratic Party and hostile to the Republican Party — particularly conservatives — and, these days, virulently antagonistic to President Donald Trump, his supporters, and his policies,” Levin wrote. 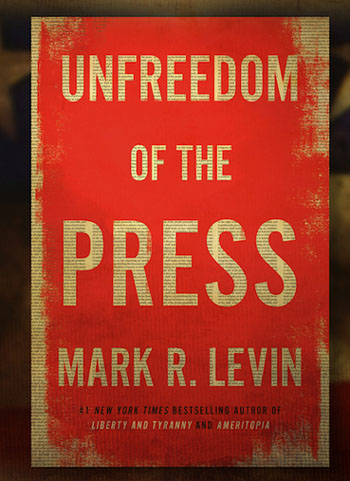 The May 19 Amazon Best Sellers list shows “Unfreedom of the Press” in the top spot. It will be released on May 21.

“Unfreedom of the Press”, Levin says, “is about how those entrusted with news reporting in the modern media are destroying freedom of the press from within….

“Indeed, social activism, progressive group-think, Democratic Party partisanship, opinion and propaganda passed off as news, the staging of pseudo-events, self-censorship, bias by omission, and outright falsehoods are too often substituted for old-fashioned, objective fact gathering and news reporting. A self-perpetuating and reinforcing mindset has replaced independent and impartial thinking. And the American people know it. Thus the credibility of the mass media has never been lower.”

Levin said his objective with the new book is “to jump-start a long overdue and hopefully productive dialogue among the American citizenry on how best to deal with the complicated and complex issue of the media’s collapsing role as a bulwark of liberty, the civil society, and republicanism…”

Levin details the assaults on Trump from the anti-Trump media — which is almost every outlet on cable and in print or online. Trump is a racist, Trump is demented, Trump is treasonous, Trump is morally depraved etc., etc., etc.

He also notes the reaction of the press when they are called out for their decidedly un-journalistic anti-Trump behavior.

“In fact, they protest when called out and claim that they are protecting freedom of the press against their critics. But are they? Or does the threat to press freedom lie with them?”

In an example from the book, Levin notes how NBC’s Meet the Press moderator Chuck Todd has announced that Todd has banned so-called “climate deniers” from his show, thus shutting down serious intellectual inquiry about a controversial topic when there are, in fact — as Todd and his producers well know — “many legitimate, credentialed, and serious scientists and climate experts who are either skeptical of or outright reject the claims of man-made climate change.”

Writing for The American Spectator, Jeffrey Lord notes that “what Todd — and other ‘journalists’ — are in fact about is propaganda, not objectivity and news. If ever there were a serious threat to press freedom, it doesn’t get more blatant than that.”

Lord cited “The Elements of Journalism”, a book by Bill Kovach (the former Washington bureau chief of the New York Times and former editor of the Atlanta Journal-Constitution) and Tom Rosenstiel (longtime media critic for the Los Angeles Times as well as chief congressional correspondent for Newsweek).

The authors “provide five ‘intellectual principles of a science of reporting.’ ” They are:

1. Never add anything that was not there.
2. Never deceive the audience
3. Be as transparent as possible about your methods and motives.
4. Rely on your own original reporting.
5. Exercise humility.

“Well said,” Lord wrote. “And most assuredly advice wildly ignored by a media that is determined to be advocates for what I call in this corner the Leftist State Media.”

Levin’s “Unfreedom of the Press”, Lord wrote, “ is decidedly a must read to understand exactly what and why Americans are — and are not — reading, seeing, and hearing when they turn on or read more or less any ‘mainstream media’ outlet.”